It’s been a shocking time in the past 12 hours in the Boston area.  In the wake of Monday’s bomb attacks at the Boston Marathon, one police officer is dead and one wounded, and one suspect is dead.   And nearly the entire metropolitan area of Boston is currently in the midst of a giant manhunt for the second suspect (pictured,  inset below) as of 8 am Eastern time. 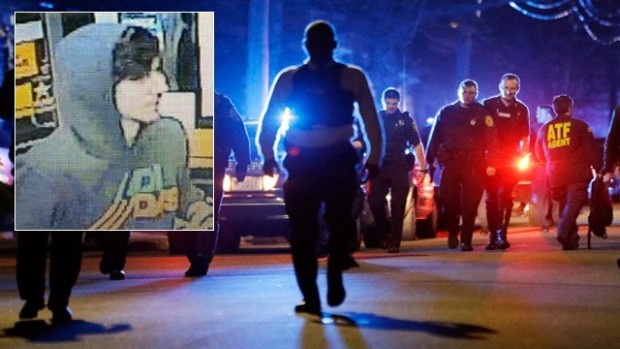 And once again, just like in the immediate wake of Monday’s Marathon bombing, ordinary citizens using social media had the scoop on tragic events even before the news media.  Armed with cameras, mobile phones and Internet connections, people in Watertown, Massachusetts were giving gripping minute-by-minute accounts as the events unfolded.  Eventually the news media will catch up, but the value of social media in these situations in warning citizens and sharing important news has been proven.

The latest events started unfolding at around 5 pm yesterday, when the FBI released photographs of two suspects.  Several hours later after a convenience store robbery and a carjacking, a ferocious gun battle was caught on video by a citizen (it was happening outside his house).

Reddit.com in particular was a source of information on events as they unfolded overnight.  Two threads (including this one) have had ongoing updates, including photographs, police scanner reports, and videos.  There’s even a link to an interactive Google map with locations identified of shootouts and other activities.  The Huffington Post also has had live blog updates with a good collection of images at the bottom of the post.  UPDATE: some have come under fire for spreading incorrect information in the early hours.

Twitter also had coverage, although there were many rumors tweeted that turned out not to be true.  For instance, the names of suspects were inaccurately discussed for hours. Still, a lot of good and valuable information was shared, for those willing to take the time to sift through it.  And you get riveting shots, like this one taken by Shawna England and shared on Twitter, showing police on the roof of a building in her backyard in Watertown at 6 am local time.

The FBI has asked citizens who know anything (“no detail too small”) to provide information by calling 1-800-CALL-FBI or visiting bostonmarathontips.fbi.gov.

UPDATE:  It appears that some on social media, while providing great info, also spread some misinformation about some individuals and named them.  And I certainly do not condone the spread of incorrect information that improperly had named individuals.  That part was regrettable.  I’ve updated this post to reflect that sentiment.

SECOND UPDATE: Reddit  came under fire for spreading false identification of suspects, and a moderator apologized.  It appears that the information may not have originated on Reddit, but elsewhere and was repeated on Reddit. There have been a lot of rumors and speculation in the mainstream media and all over the Web.

THIRD UPDATE:  A more balanced semi-defense of Reddit, disagreeing with characterization of those on Reddit as vigilantes. I certainly don’t characterize Reddit as a vigilante community, either.  Some people are being very harsh on Reddit.   Could some of it be driven by traditional media who have bought into rumors before?  The whole reaction-to-Reddit thing is becoming a story all by itself….