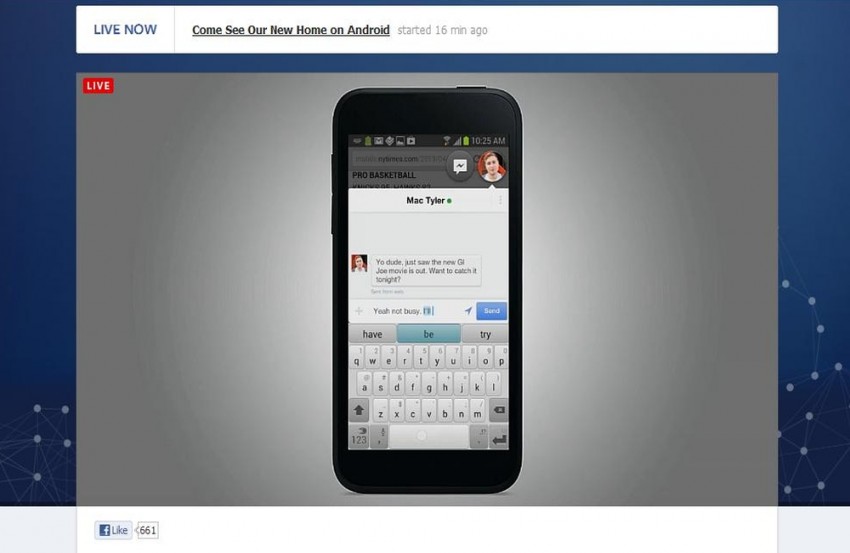 Facebook Home, the new Android-based app that is designed to overlay the regular Android home screen, reached a bit of a milestone recently. According to several reports, at least a half-million people have downloaded Facebook Home from the Google Play store.

Facebook Home is currently exclusively available through Google Play, and only ready to run on select Android phones. New HTC First phones are the first devices to have the App pre-loaded.

Observers consider the number of  downloads a slow start considering the popularity of Facebook. Reviews of the phone are mixed. For example, Steve Kovach at Business Insider observes that the app’s messaging feature “Chat Heads” is so brilliant everyone from Apple to BlackBerry should copy it. On the other hand, Kovach says if you use your phone for productivity and need access to other apps, Facebook Home is too much of a distraction.

Outside of the download statistics, the early reviews have not been kind to Facebook Home. Based on the reviews at the Google Play store, more than 6,000 people have rated it with just 1 star and the app gets an overall 2.2 rating. Facebook’s standard Android app gets an overall 3.6 rating, but a majority of owners have given it a full 5 stars.

Facebook says it is constantly updating the Home app and will release new versions more often than an operating system would, according to a report at FastCompany. Facebook’s VP of Mobile Engineering Corey Ondrejka spoke with reporters recently and hinted that some features could be updated soon, including the addition of folders and widgets so that Home does not interfere as much with a user’s regular Android home and lock screens. Ondrejka also said that users will likely be able to edit their news feeds on Home more like the way they can on Facebook’s website.