Google Affiliate Network To Shut Down, Surprising Some But Not All 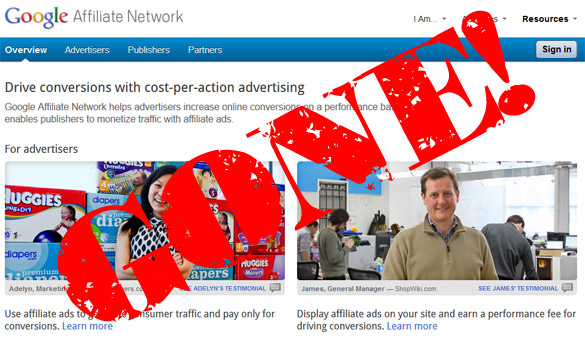 Google announced this week it will shut down the Google Affiliate Network. Google pledged to continue to support customers as the network winds down “over the next few months.”

The closing was announced by J.J. Hirschle, head of Google Affiliate Network, on its official blog.  Hirschle said the program originally was created to help advertisers drive conversions (sales) via cost-per-action advertising.  Hirschle said Google re-evaluated the service in light of recent developments in the marketplace.

“We’re constantly evaluating our products to ensure that we’re focused on the services that will have the biggest impact for our advertisers and publishers,” Hirschle wrote. “To that end, we’ve made the difficult decision to retire Google Affiliate Network and focus on other products that are driving great results for clients.”

A Surprising Announcement – to Some

Some industry observers were surprised by the move.  Others were not, pointing out that Google doesn’t need a network of third party affiliate sites any longer, given how the advertising marketplace has evolved.

Affiliate program management consultant Geno Prussakov of AMNavigator said the decision to close Google’s affiliate network was a surprise in the sense of there being no advance public signals.  For instance, representatives of the Google Affiliate Network were scheduled up until this week to speak at a conference run by Prussakov.  And just days earlier there had been an update on the Network’s Google+ page.

This is the second time Google has shut down its affiliate network, according to industry observer Barry Schwartz.  The first time was in 2008. Later in 2010, Google reintroduced the current Affiliate Network.

Aaron Wall, founder of SEOBook, points out that advertisers already have a number of replacement options with Google itself.  “I don’t think the closing of the affiliate network means that Google wants to be done with the affiliate model. Rather, Google would prefer to consolidate their efforts through their existing channels and work directly with merchants without having to manage relations with affiliates” on top of that, he notes.

Google doesn’t need to run an affiliate network to help brand advertisers get offers in front of buyers, he explains. “When Google includes links in travel or e-commerce searches, they don’t really need a third party network to distribute those ads. The ‘ads’ are integrated right in the search results,” he adds.

One example Wall points to is Google Offers, a daily deal/coupon offering. Google Offers are delivered to customers who sign up via email but also included in Google Maps and other search results.

Over time Wall said he also expects to see Google AdSense units become more like the conversion-driven ads used in affiliate offerings. He points to Amazon.com ads as the model for this.  Amazon has quietly been ramping up its advertising offerings.  “Amazon.com’s ads often include things in them like ‘buy now’ buttons, coupons and movie trailers. In time I would expect some Google AdSense ad units to eventually look more ‘producty’ in some areas and have a lot more of these types of extensible features added to them,” Wall says.

And what about alternatives for affiliate website publishers that today earn money from affiliate ads placed on their sites?  Hirschle suggests Google AdSense (ad units placed by publishers on their websites to earn advertising revenue).  And as Prussakov points out, there are other affiliate networks publishers can join.

Shawn Hessinger is the Executive Editor for Small Business Trends and a professional journalist with more than 20 years experience in traditional and digital media for trade publications and news sites. He is a member of the Society of Professional Journalists and has served as a beat reporter, columnist, editorial writer, bureau chief and managing editor for the Berks Mont Newspapers.
11 Reactions
Subscribe
Follow @smallbiztrends
RSS LinkedIn Pinterest iTunes