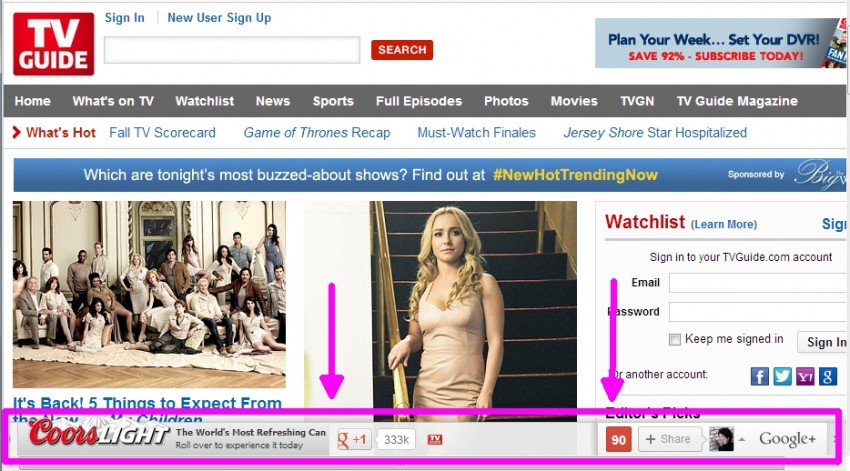 It was less than a year ago, in 2012, that Google acquired Meebo.  And now we see Google shutting down Meebo.

Meebo is a social sharing bar that you sometimes see at the bottom of websites. With it, users could share items on social networks.  The Next Web reports that the Meebo bar disappeared for a while after Google bought it but then returned with Google+ sharing capabilities built in.  The Meebo bar has been used by bloggers as well as some large sites, such as TV Guide.  Larger sites often incorporated small ads in the bar (see image above showing Meebo bar outlined in pink).

The Meebo team will now focus on Google+ instead, including initiatives such as the recently launched Google+ Sign-In and Google+ plug-ins, the announcement says.

After June 6th, the Meebo code will no longer work.  They are no longer accepting new Meebo accounts.  There’s also an FAQ with more details for existing Meebo publishers.

Lee Jarratt, editor of the website Google Plus Daily says “I don’t think many will be sad to see the product retire, as it was mostly seen as a nuisance since it followed website visitors down the page as they scrolled.”

This is yet one more sign that Google+ is the future for Google.  If you’re not on Google+ with a professional profile and a Google+ page for your business, you’re falling behind.  The writing is on the wall with announcements like these.