You may remember that line from a wireless-phone company commercial.  The reason that line is so successful is that we all say it. I’m willing to bet that many of you say that or some version of that question pretty often. We want to make sure we are heard.

This review of the Plantronics Voyager Legend headset is for the entrepreneur on the go, or the small business owner, manager or professional who needs a solid hands-free device with excellent reception and sound clarity.  And one also looking for time savings and convenience.

Last year, I was part of a Plantronics contest and received a Voyager Legend headset. At the time, I rarely used my mobile phone for important business calls because I could not depend on the other mobile headsets I had tried in the past. That meant I coordinated most of my meetings when I was absolutely certain I would be in a quiet place with the strongest wireless signal.

Since then, little by little, I started to use the headset. I’m pleased to report that I use a Voyager Legend headset nearly every day now.  I live on an island and when I go out for the day for business meetings, I have to take a ferry and am often gone for the day.  So I end up taking a lot of calls when mobile.  And I worry less about where I’m going to be when it’s time to take an important call.

The Voyager Legend (pictured below) comes in several flavors – regular and what is known as “UC” which stands for Unified Communications . 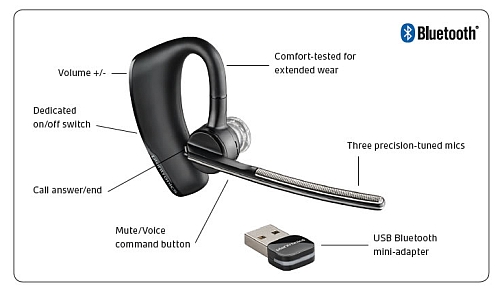 UC is the platform on a user’s computer that allows them to integrate IM, phone calls, video conferencing and more. The Voyager Legend UC headset plugs into your computer with the included USB dongle, letting you take voice and video calls from your computer. The Voyager Legend UC also comes in two variants; one regular and one optimized for Microsoft. The UC version, either one, is $199. The regular Legend (non-UC version) is priced at $99 and this is the one I have.

Both versions of this headset are multi-point, allowing you to have two different mobile phones configured to connect to your headset.  That means you don’t have to switch headsets to use a different device.

For team members who use multiple devices during the workday, you begin to see the advantages.

Although this review is focused on the Voyager Legend, I have to throw in a few good words about another option – the Calisto speakerphone, also by Plantronics. The Calisto is a portable speaker approximately four inches square by 1.5 inches tall. It can connect to your laptop with a small USB keyfob or via Bluetooth.  It is powered by a rechargeable lithium battery (connect it to a USB charger).

I am using the 620 model, optimized for Microsoft Lync and it is wonderful. Seriously. I have used it as a speaker in hotel rooms to play music on my Samsung S3. And I have used it as a speakerphone in my car when I’m not using a headset. It connects very quickly and for those who find that their cell phone speakers are just not enough, this little device is a lifesaver. It comes in its own little neoprene case for $149.95. It is also UC-capable.

Overall, if you find that you want a robust, sophisticated hands-free device, the Voyager Legend headset (UC or regular) is a serious contender.

If you just can’t put something in your ear, or need a speakerphone, look to the elegant little Calisto speakerphone.

TJ McCue served as Technology/Product Review Editor for Small Business Trends for many years and now contributes on 3D technologies. He is currently traveling the USA on the 3DRV roadtrip and writes at the Refine Digital blog.
5 Reactions
Subscribe
Follow @smallbiztrends
RSS LinkedIn Pinterest iTunes