Thirty-nine percent (39%) of small business owners are seeing a return on investment from social media.  That is according to a recent survey by Manta, released just last week.

Manta, an online small business community, surveyed more than 1,200 of its members to generate its quarterly Small Business Wellness Index, where these findings are from.  Chart excerpt: 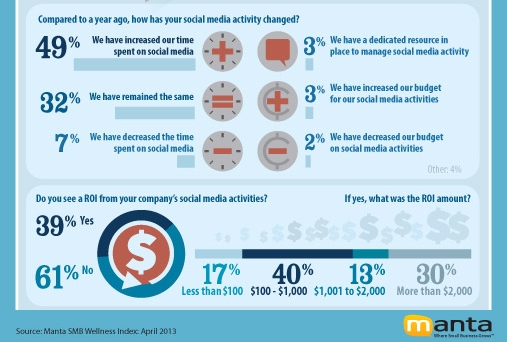 Now you might think that 39% isn’t so positive, if more than 60% are not seeing a return.  However, let’s put it in perspective with the other findings of the survey. When you do that, the small business attitude toward social media looks far more positive.

Taken all together, it suggests that small businesses are seeing benefits, because they keep devoting the resources to social media.  However, not as many have seen a clear return on investment from social media quantified in actual dollars.

Still,  just because you can’t pin a dollar amount to it, doesn’t mean it is worthless.  There are many activities in a business that add value but are hard to pin down in dollars.

One possibility is that small business owners are still experimenting to find what works best.  After all, we know that social media is complex.  Not every social site works for every business.

It takes time and knowledge — and trial and error — to figure out how to get a return on investment from social media.

Pamela Springer, CEO of Manta, notes that a shift is taking place, in her comments accompanying the release of the results.  As small businesses experiment and figure out what works best for them, they will settle on activities that drive the most return for them, she observes. She says, “As a highly pragmatic and time-constrained group, small business owners are strategically adopting platforms that show real results for their business. However, social media is not a stationary phenomenon. As SMBs shift from the experimental stage to a results-focused phase, their social media usage will evolve to maximize the value.”

Other interesting factoids from the survey are that Facebook is the site small businesses have the most difficulty maintaining.  LinkedIn and Twitter follow, in that order.

Anita Campbell is the Founder, CEO and Publisher of Small Business Trends and has been following trends in small businesses since 2003. She is the owner of BizSugar, a social media site for small businesses.
35 Reactions
Subscribe
Follow @smallbiztrends
RSS LinkedIn Pinterest iTunes