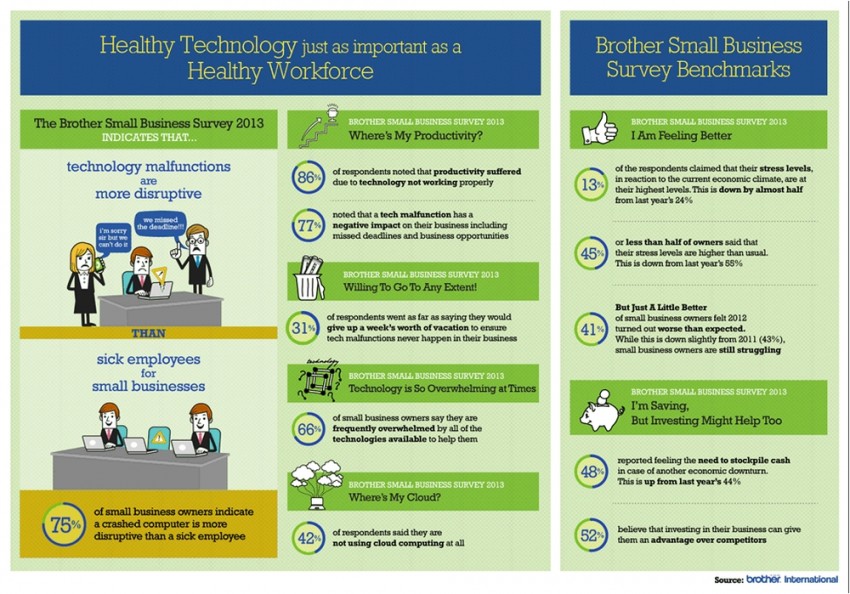 A recent survey has found that most small business owners would rather deal with sick employees calling off on Mondays than a laptop or some other device that’s on the blink.

Brother International Corp.  just released the results of its annual Small Business Survey and found that 75 percent of small business owners would rather deal with the absence of an employee than a technology issue.  Yes, that’s right: small business owners apparently believe that a down computer disrupts the business more than a down employee.

Another finding:  business owners were sure that a malfunctioning computer or any other of the myriad tech devices had cost them a business opportunity or caused them to miss a deadline, the study notes.

More technology may not be the answer — it may be part of the problem.  As more devices are added, business owners have become swamped dealing with their specific technological issues. Brother notes that 66 percent of small business owners described themselves as “overwhelmed” by the amount of technology and almost all (86 percent) said that production at their business has slowed in the past year because of a technology malfunction.

More than half of small business owners are spending more money on technology, too. Brother’s study found that 51 percent responding to its email survey said they make technology investments in their company a top priority, more than machinery or facilities spending.

Read the survey results here (PDF). The survey polled 500 U.S. business owners at companies with 100 or fewer employees between February 21st and March 4th, 2013. Brother is based in Japan, but has had a presence for over half a century in the U.S.   (Brother is a recent sponsor of BizSugar, owned by Small Business Trends.)