Imagine being in the same situation as Jim Franklin, the CEO of SendGrid Inc. One of your employees tweets a photograph along with a critical comment at a large software developer’s conference known as PyCon, in California, where she was attending on behalf of the company. In the tweet she took issue with what she interpreted as sexually offensive comments.

What ensued was nothing short of a public battle on the Internet. Caught in the crossfire were two companies and at least two employees.

The Sequence of Events

The Send Grid employee, Adria Richards, was a “developer evangelist” tasked with creating goodwill for the company among the developer community. She snapped a photograph of attendees she overheard making comments she found offensive. She published it to the world on Twitter. Here’s the tweet that started the firestorm: 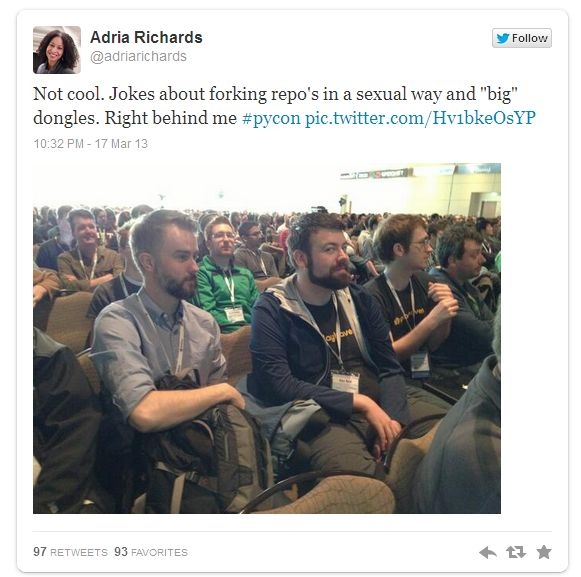 As a result of her tweet, one of the people in the photograph was fired by his employer, PlayHaven.

The technical community soon squared off into sides. What happens next is like something out of a movie — or perhaps a nightmare.

People begin making threats on Twitter and elsewhere against Richards (some of them vile, inexcusable threats of bodily harm).  Soon SendGrid is facing a Distributed Denial of Service (DDoS) attack, according to a report from The Denver Post. For a company like SendGrid, in the business of sending email on behalf of its customers, having your Internet capabilities disrupted is a business-threatening situation. It’s not just YOUR company that is affected, but your customers.

Based on tweets posted by @SendGrid prior to the firing of Richards, the company’s email servers were experiencing errors. At 9:10 a.m. local time, the company posted to Twitter that it had fired Richards, even including her handle in the tweet.

At 3:10 p.m. local time, the company acknowledged the DDoS attack on its Twitter feed. One suggestion from The Denver Post report that hasn’t been confirmed is that SendGrid customers, upset with Richards’ reaction to the comments at the conference and subsequent blog post, had hacked the company’s email system.

Either way, based on the replies to the tweet that it had fired Richards and the 800+ retweets of that one post, SendGrid got the kind of publicity that no CEO ever wants to get.

@sendgrid Wow, I’d never want to work for you. Way to set back women in tech empowerment! (@adriarichards)

SendGrid’s CEO explained the decision to fire Richards on the company’s website, in a post titled “A Difficult Situation”:

“To be clear, SendGrid supports the right to report inappropriate behavior, whenever and wherever it occurs. What we do not support was how she reported the conduct. Her decision to tweet the comments and photographs of the people who made the comments crossed the line. Publicly shaming the offenders — and bystanders — was not the appropriate way to handle the situation.

A SendGrid developer evangelist’s responsibility is to build and strengthen our Developer Community across the globe. In light of the events over the last 48+ hours, it has become obvious that her actions have strongly divided the same community she was supposed to unite. As a result, she can no longer be effective in her role at SendGrid.”

According to a post on the blog ButYoureaGirl.com, Richards — three days before she was fired — explained her side. She said that two male employees of another PyCon sponsor were sitting behind her near the end of the conference and while a speaker was on stage, they were making jokes about “forking” and “dongles”.

These terms may be common to programmers, but were interpreted as offensive by Richards. That’s when she took the picture and tweeted it with a plea for staff at PyCon to intercede.  According to tweets from the conference handle, Richards was thanked for notifying PyCon conference staff of the situation and told that it had been addressed.

Of course, as we now know, that was only the beginning….

As a CEO, What Can You Learn?

The situation that CEO Franklin found himself in, and what has happened since, is enough to give any startup CEO or small business owner pause.

(1) Consider the personality of who represents your company in evangelist roles and on social media. While it’s clear Richards knew how to use social media, and definitely should not have to suffer sexually suggestive comments — a key issue was whether she exercised good judgment in how she handled the situation.

Do your employees think before they tweet? Someone who is outspoken may develop a following on social media easily, but that very outspoken nature may lead to communications that are not completely thought through. Most companies simply don’t want employees making statements that put them in the middle of ANY controversy.

(2) In the midst of a business-threatening crisis, like a DDoS attack, will you keep your head? One of the criticisms of SendGrid is that it publicly tweeted an announcement that it had fired someone. Most likely that was done to alleviate the DDoS attack and defuse the situation — or, as AllThingsD described it, SendGrid caved in and “sided with the mob.”

But even if you agree with SendGrid firing Richards, in hindsight was it handled the best way?

(3) Keep in mind that no matter what you do, chances are that once a situation has blown up into a major incident, you’ll likely be criticized. Are you prepared for that criticism?

On Twitter there were those who ran the gamut, from being supportive of SendGrid, to being critical of each party’s decision to take each of their actions public: Richards for publicly shaming those she took issue with at the conference, and SendGrid for tweeting the firing of an employee.

@sendgrid @adriarichards Thank you for doing the right thing.

@sendgrid I STRONGLY disagree w/ what @adriarichards did, this is ridiculous. If I ever mistakenly apply for a job at SendGrid, shoot me.