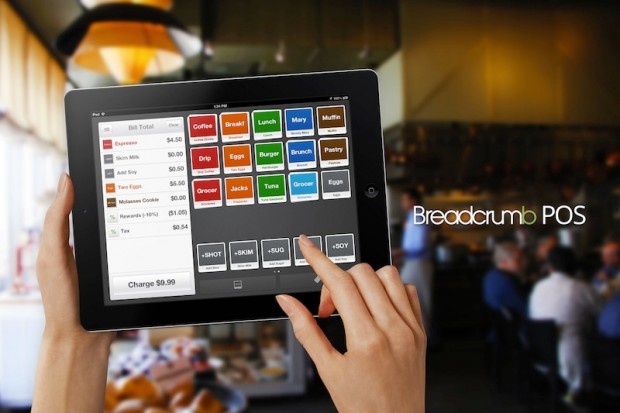 Still thinking of Groupon as a company that sends out daily deal emails all the while incurring the ire of small businesses that lose money on one-time customers? Well, think again.  That’s the old story.

Groupon has a much more compelling small business story to tell in 2013.  It’s a very positive story, in fact.  One part of that story is how Groupon is repositioning itself as a provider of technology systems to help local businesses become more profitable and increase sales.

Since last year, Groupon has offered a POS system for small businesses. Just this week the company expanded its point of sale (POS) systems to include a new, free POS system called “Breadcrumb POS.”

It’s a downloadable app that you use with an iPad.  It functions as a simple POS system that can be used by any small local business that handles sales using a cash register, such as retail stores and coffee shops.

Groupon has had some tough times on Wall Street over the past year. The company, just four years old, is already  reinventing itself.  Part of the reinvention is on the consumer side with how deals are positioned and made available to consumers. For instance, deals are now heavily focused on mobile, which accounts for 45% of North American deal volume.

But there’s also a reinvention on the small business merchant side.  And that’s where the Breadcrumb POS system fits in, along with payment processing and associated technologies.

“One of our proudest achievements [is] the economic boost we’ve provided to local merchants. Not only have we funneled billions of dollars into our local merchant community but based on surveys of nearly 2 million Groupon customers in North America, over 80% of the customers we send to merchants are either new or have not been to that merchant in the prior 3 months. Groupon can be a powerful force of new customer acquisition and financial returns for small businesses.

We began making investments about a year ago into what we call the operating system for local commerce. It’s a bundle of technology around payment systems, point of sale systems, loyalty and reward systems.”

He points out that Groupon has to be valuable to both consumers and small business merchants:

“And because we are for many many merchants – hundreds of thousands of merchants – their largest source of new customers, we also at times can be a pain point, in that we’re sending all these new customers. We want to help merchants manage that process. And we want to help them determine how best to target these customers so that they come back on a repeated basis. So we realized we needed tools inside the merchant’s shop to help them do that, and hence the investments we’ve made.”

The Breadcrumb point of sale system was an acquisition Groupon made in 2012. Seth Harris, the founder of Breadcrumb, is from the hospitality industry.  He was frustrated with the POS systems in restaurants and bars he ran in New York, calling them “old, clunky, difficult to use, hard to set up and expensive.”

So he founded Breadcrumb in January of 2011.  The following year he was approached by Groupon.  “My initial reaction was why would these guys want to get into the POS business?” he said.  But he became impressed with the Groupon vision for local businesses.

The product announced just a few days ago, named Breadcrumb POS, is a “lite” version of the original Breadcrumb PRO system.

The PRO system is designed primarily for restaurants and bars. It has a floor plan layout for your restaurant.  It includes hospitality-related reports.  It also offers the ability for servers to modify menu items to accommodate special orders, such as ordering a burger well-done or with no fries.

According to Harris, whose title is now VP of Breadcrumb, it’s more than just a POS system. “It’s designed to help you know your customers better.  For example, with the PRO product there is an integrated delivery system.  If you do deliveries, you can put customer information in the delivery system.  When customers come back in, you can find their information again.  You can even do telephone integration so that when they call, the customers can be greeted by phone,” he notes.

Breadcrumb PRO integrates with several hospitality industry systems.  You can also download reports as CSV files and then upload them to QuickBooks or another program.  Breadcrumb PRO does require payment of a monthly fee, with several pricing levels.

This free version of the POS system is simpler because, as Harris says, a small ice cream shop may not need a layout plan for tables nor special menu options.  It is “even easier to set up and use” than the PRO version, he notes.

Breadcrumb POS offers simpler reports than the PRO version.  There is no ability currently to download CSV files, however.

With either system, you can buy your own iPads.  Breadcrumb works with any version of the iPad, including the iPad Mini.  According to Harris, it is not meant for an iPhone, as he hasn’t seen demand by small businesses  for using it on such a small screen.

Or you can buy iPads through Breadcrumb. They also sell cash drawers, stands and printers.

You are not required to process credit card payments through the Breadcrumb payments system, but the point of sale system is set up to handle them and work together.  Currently the processing fees are 1.8 percent plus $0.15 per transaction (MasterCard, Visa and Discover) with no monthly fees.  Harris says that Groupon has pledged to meet any better credit card processing rate a business owner gets elsewhere.

The swipe device that you plug into the iPad, costs $15.  You get next-day deposits into your bank account.

“Ultimately,” he says, “Breadcrumb’s mission is to bring together merchants and customers by making it better and easier to buy things.”