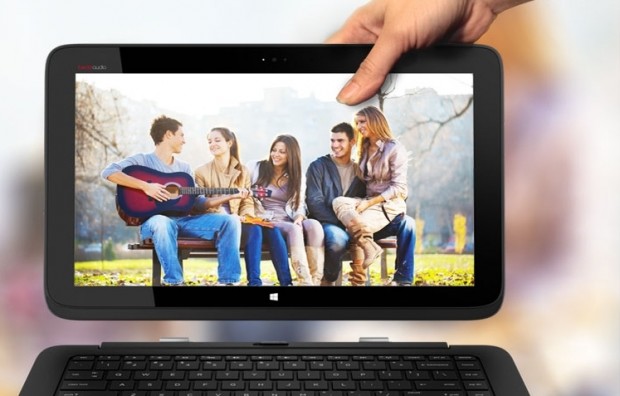 “Hybrids” is a hot category in 2013. Hybrids are tablets that double as laptops or desktops. They are still portable like a tablet, but larger than traditional tablets and come with keyboards.  Hewlett-Packard is introducing its third tablet laptop hybrid.

HP plans release in August of a 13.3-inch tablet laptop hybrid based on Windows — called the Split x2.

At about 9 x 13 inches, the device offers a 13.3 inch display screen.   Obviously, it is going to be heavier than smaller tablets. With the keyboard it weighs under 4.85 pounds, but weighs “only” 2.3 pounds as a tablet. Still, that’s light enough to carry around with one hand.

Like many newer tablets, it comes with two cameras: an 8-megapixel rear camera and a 1080 pixel front-facing camera.

You can connect with WiFi. Bluetooth, MicroSD reader, USB and audio jacks make for this device ‘s diversity and usefulness.

The Split x2 is an upgrade to the ENVY x2, HP’s first Windows tablet laptop hybrid introduced last year, reports NDTV Gadgets. The Split x2 replaces the Atom processor of the ENVY x2 with a choice of a 3rd Generation Intel Core i3 or i5 processor. The screen is larger, too, with 1366 x 768 resolution.   The additional functionality also costs more. Cost of the new tablet laptop hybrid is $799.99 MSRP compared with $649.99 for the ENVY x2.

This hybrid tablet — HP calls them a “2-in-1” — comes out of the HP Consumer products group, but we’ve noticed that hybrids tend to get a second look from business users. Professionals want the mobility and fun of a tablet but really need a keyboard to make the device functional for work purposes. Also, Windows 8 systems hold special appeal for business users who may need to work on PowerPoint, Excel or Word files. That can be difficult if not impossible on a traditional touch tablet using a non-Windows operating system.

“What we’ve done this time is take that whole x2 approach and adapted it to something that gives you even more performance and more capability,” said David Conrad, Director of Product Management at Hewlett-Packard in a video about the new device.

“But then we’ve also added one more thing, which is storage,” he said.

HP also recently introduced a 10.1″ Android hybrid, the SlateBook x2, priced to rival the iPad. Other brands have introduced tablet and laptop/desktop combinations to the market, too.

After some struggles in recent years, HP, one of the largest computer companies, has experienced a bit of a turnaround with sales higher than expected in the second quarter of 2013.