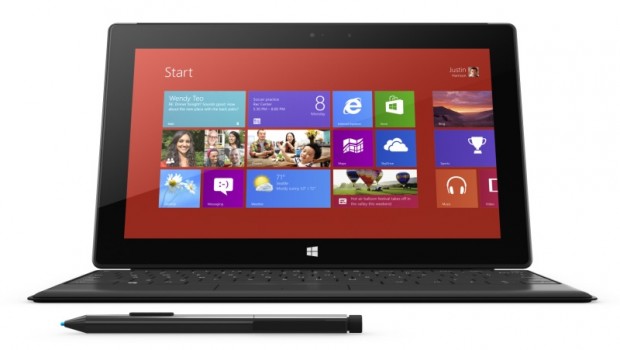 Microsoft has joined the ranks for the top 5 tablet sellers according to research firm IDC.  The Redmond, Washington based tech giant sold 900,000 units and had 1.8% market share for the first quarter of 2013.

Now it might sound as if 1.8% market share isn’t much to crow about.  Keep in mind, though, that a year earlier Microsoft had zero market share.

Even more telling is Apple’s drop.  A year ago it had 58% market share of shipments. This year in the first quarter of 2013 Apple shipments made up just 39% market share.

Most of Microsoft’s tablet sales came from the Surface Pro, which uses the Windows 8 operating system and targets business users.  “An interesting factoid from IDC is that the more expensive Surface Pro made up a large amount of the 900,000 total Surface units. The Surface Pro first went on sale in the U.S. and Canada in February, and Microsoft has plans to expand it even further across the world to 25 countries in May,” writes Jake Smith on gadget site PocketLint.

Microsoft products appeal to business users. And the Surface Pro is a business tablet.

One of the advantages of a Surface Pro over other tablets is the ability to use Microsoft Office programs you might use at work, such as Word, Excel and PowerPoint.  You don’t need to learn a new operating system if you’re using Windows 8 on your desktop computer.

Equally attractive for business users is the hardware.  The Surface Pro straddles the line between laptop and tablet. There’s a built-in stand, and a snap-on keyboard that doubles as a cover. And it comes with a stylus so you can draw, select items or make handwritten notes.

And that’s exactly the kind of business tablet that business people need. Tablets that are mainly navigated through touch are great for browsing and playing games. They are ill suited for work such as creating and editing documents.

My Google Nexus 10 (made by Samsung) is light enough to hold with one hand and slip into my tote bag. It is terrific for watching videos and reading the news.  But trying to write a business document or create a post with it is frustratingly slow. Nor can I edit a PowerPoint presentation or an Excel spreadsheet.

Microsoft has an effective television ad campaign going on now for the Surface Pro that I have to believe is helping raise awareness.

The ad features business people (actually professional dancers) doing a “dance” while sitting around a conference table.  The music is catchy and upbeat.  The ad conveys that meetings can be fun and exciting, not dull and boring — IF you have a business tablet like the Surface Pro.  The ad flashes quickly to the Surface Pro tablet being used for business purposes.  Those few quick flashes are enough. We business users already know what kind of applications Microsoft offers – we don’t need more.

Some commentators have criticized the ad – I could not disagree more.  Perhaps to a geek the commercial seems old fashioned.  But from the perspective of a business user, the ad is energetic, memorable and manages to say quite a bit about what the Surface Pro tablet can do for business users — all in 30 seconds.

The 30-second version showing on television now has better business focus than the longer online version embedded below, because it leaves out the distracting middle part with the beatbox.  The ad  “speaks”  to business people, just as the Surface Pro itself “speaks” to business people.