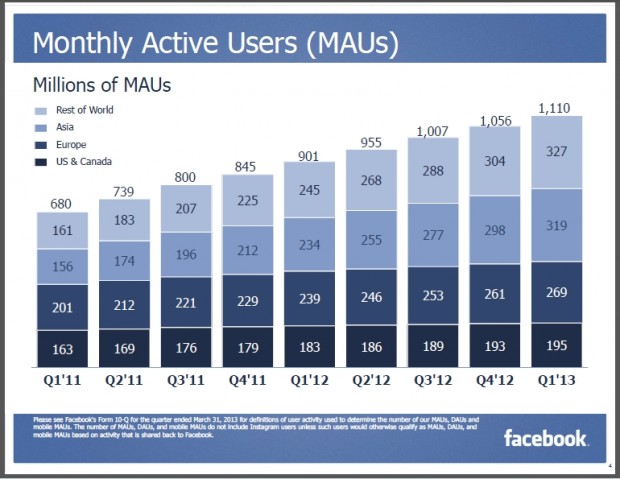 The Guardian newspaper set off a mini brouhaha last week when it reported that users were running (not walking) away from Facebook. It turns out that some of the numbers in that story were wrong.

The Guardian published a story on April 28, attributing data from SocialBakers, claiming that Facebook lost about 6 million users in the United States the previous month, and 1.4 million in the U.K.  Due to wide syndication of The Guardian articles, that story appeared in multiple places across the Web, including the San Francisco Chronicle.

The Next Web then came out with its own piece refuting those numbers.  Jan Rezab,  SocialBakers’ CEO, put out a clarification statement, indicating he had cautioned journalists from using SocialBakers numbers for determining traffic.

The fact is that Facebook is still growing, per numbers subsequently released last week during Facebook’s earnings call with Wall Street analysts. Facebook has 1.1 billion active monthly users as of March 31, 2013.

The fastest growth in users right now is coming from Asia and places outside of North America and Europe.

Regions such as the United States, Canada and Europe also continue to grow, albeit at a slower rate.  That’s not news – growth in those regions has been flattening for a number of quarters.

It’s not even surprising, when you consider how much of the population in those regions is already using Facebook.  Take for instance, Canada and the United States, which have a combined population of 350 million people.  According to Facebook, those two countries have 195 million active users monthly — or 56% of the total population. That’s a lot of people.

Not only is Facebook still extremely popular, it’s popular with small businesses, too.

Sheryl Sandberg, COO of Facebook, said in the earnings call that Facebook feels it has a deep competitive advantage with small business people, in that they don’t have to learn a new technology platform because they are already using Facebook personally.

Local businesses (which tend to be small) get engagement, too.  According to numbers provided to us by Facebook,  in an average week there are 645 million views of and 13 million comments on local business Facebook Pages.

“We’re really excited about page post ads. Over 7.5 million posts have been promoted by pages. Over 30% of the people using the product are new advertisers to Facebook. And I think that speaks to one of the earlier questions on small … businesses and their adoption. If you say to an SMB, do you want to become an advertiser? That’s a heavy lift. If you say to them, … you’ve posted something, do you want to pay a few dollars to promote this post to reach more people? That is a much easier on-ramp to advertising spend with us and we think it’s working really well.”

However, it’s an open question about how long small businesses will stick with Facebook.  We already hear about  Facebook fatigue.

Part of the issue is that Facebook seems to continually introduce changes that require re-learning.  There are only so many learning curves you can go through. Soon other alternatives begin to look as (or more) attractive.

In the analyst call last week, Facebook CEO Mark Zuckerberg talked about the importance to Facebook’s revenue of injecting ads into content. With so many users (nearly 68%) using mobile devices, the company had to stop relegating ads to the right column of the site, since many mobile users never see those ads.  He said, “getting ads in newsfeed was a valuable step in making it so that everywhere where someone is consuming content from Facebook the business model kind of goes along with that naturally.”

For small businesses, the occasional promoted post or advertising campaign may not be expensive on its own — but it adds up.

On top of that, consider the labor cost involved.  Small business Facebook pages have to be updated regularly. You have to learn new features, and wend your way through a maze of Facebook rules such as what can be in a cover image or not, and restrictions on promoting contests.  A recent Manta survey found that small businesses consider a Facebook page the most difficult to maintain of all social sites. It doesn’t take long for some small business owners to question the escalating amount of time and money they’re investing in a third-party site that keeps getting more complex.

Still, A Long Way From a Mass SMB Exodus

Yet, aside from the occasional anecdotal story — we’re a long way from seeing small businesses flee from Facebook. With 3 million new small business Facebook pages created just in the first quarter of 2013, the opposite seems true.

Small businesses appear to be flocking TO Facebook, not away. After all, 1.1 billion monthly users is a huge market to turn your back on.

At the very least, the potential reach of your company’s message and the price of setting up a page on the site (free) are reason enough to keep your small business Facebook presence active.

If you think you’ve experienced a lull in Facebook interaction, take steps to reinvigorate your small business Facebook page. We recently collected a dozen Facebook tips for improving your company’s presence. And just so you avoid them, we offer 10 things you should not do on Facebook, as well as reasons your Facebook page stinks.