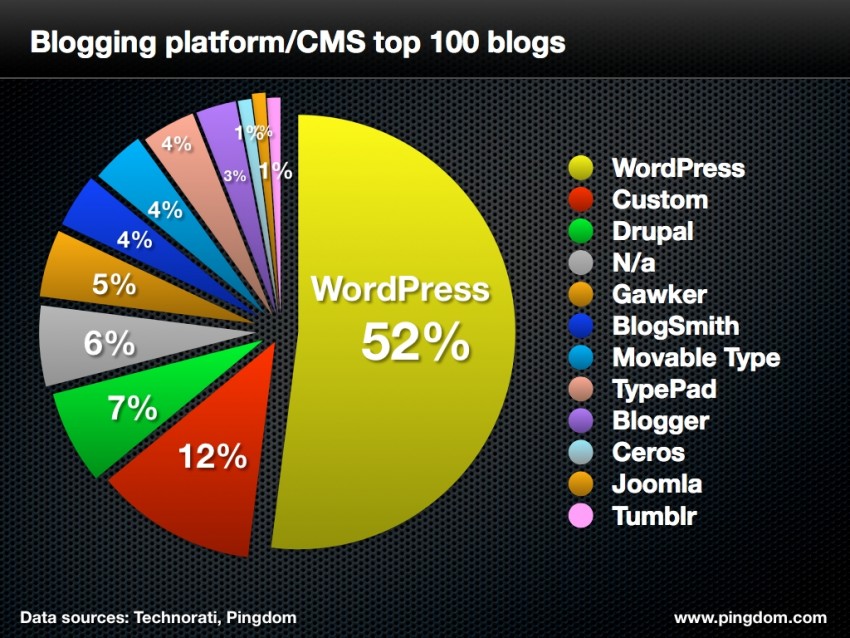 If your business website or blog is using WordPress as its content management system (CMS), you’re in good company. The majority of  the top 100 blogs are using WordPress, says a new study from Pingdom.

Fifty-two percent of the top 100 blogs are currently using WordPress, either hosted or self-hosted, according to an annual study conducted by Pingdom.com. Pingdom gets the top 100 list of blogs from Technorati.

The study notes that the Web and blogging sites, specifically, have changed considerably in the last few years. Pingdom says:

“For many of us, what we used to blog about we now publish to social networks. But there’s also no denying that blogging is not gone. It has, however, changed as has the tools used to publish blogs with. Some, like WordPress, started out as blogging platforms and has taken on more general content management functionality. Others have developed in the opposite direction.”

The 2013 study from Pingdom shows that 4 more of the top 100 are now using WordPress compared with last year. No other single CMS provider even comes close to matching WordPress’ dominance among the top Technorati blogs.

Interestingly, 12 of the top 100 have custom systems created specifically for them. Drupal is the second-most popular blog platform, with 7 of the 100 using it.

But some of the old stalwarts are no longer as popular as in years past, specifically Movable Type, Typepad and Blogger.

Two of the top five blog sites, including the most popular (The Huffington Post), are using Movable Type for their CMS system.

And while TypePad added two spots in the top 100 and and Google’s Blogger added one, they are still mere shadows of their former place in the lives of bloggers.

Not only is WordPress popular for blogs, but as the report points out, WordPress has taken on a much larger role as a general CMS system. It’s become very popular with small businesses that use WordPress to build their entire websites, not just their blogs. WordPress keeps a running counter of the number of WordPress sites, and reports the total is over 65 million worldwide.

Joshua Sophy is the Editor for Small Business Trends and the Head of Content Partnerships. A journalist with 20 years of experience in traditional and online media, he is a member of the Society of Professional Journalists. He founded his own local newspaper, the Pottsville Free Press, covering his hometown.
44 Reactions
Subscribe
Follow @smallbiztrends
RSS LinkedIn Pinterest iTunes