Facebook says it is trying to make its advertising products easier to use and more understandable for customers.

In an announcement on the official Facebook Newsroom blog last week, Fidji Simo, product manager at Facebook, wrote the company would streamline its advertising products from 27 different choices to about half that in the next six months.

The company says it decided to simplify its advertising offerings because of customer preference. In her post, Simo wrote:

Over the past year, we have been gathering feedback from marketers about our ads products. One point we heard loud and clear is that we need to simplify our product offering. As the services we provide to marketers have grown, so have our new products; while each product may be good on its own, we realized that many of them accomplish the same goals.

Though Facebook was not specific about all the advertising products likely to be eliminated, Simo did mention some that would be disappearing. And some sponsored posts associated with Facebook business pages will be affected.

One of the sponsored products scheduled to disappear is a feature called Questions. The special post offers a multiple choice question about a product or service users can respond to if they wish. But in the post, Simo said business customers would prefer to just add a question in a post and get a response in the comment section. 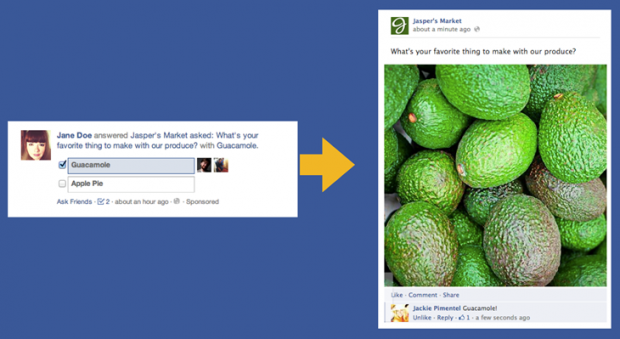 Another kind of sponsored post set to disappear is the Offer, wrote Simo. The Offer post includes a simple product description and “get offer” button, allowing visitors to take advantage. Again, Simo said advertisers felt using an ad explaining the offer with a link to the company Web page was simpler and more effective.

Another type of ad post that will not so much be eliminated as consolidated is the sponsored story post. Up until now, Facebook advertisers have had to buy a separate product for the best “social context” on their sponsored posts. Often this includes information on friends or fans who have “liked” or “commented” on a sponsored post.

The added product is called “sponsored story” and is a separate purchase in addition to the post. From now on, however, Simo says Facebook will be eliminating the extra steps and adding social context with each ad purchased.

It’s unclear from Facebook at this time whether this means advertisers will be paying less for the additional social context in their ads or whether the cost of a sponsored ad will simply be part of the new advertising package. However, Simo claims data from sources like Nielsen and comScore show social context increases return on advertising and brand awareness.

Changes are expected to make ads more consistent in appearance and to make the advertising process on Facebook simpler by reducing the number of potential ad formats. Below is Facebook’s vision of a more consistent ad format.

Most of these changes will begin in July, Simo wrote. She was less specific about what other changes the company might be making in its advertising products and services or what cost changes, if any, might be associated with the consolidation.

Reaction from the Facebook marketing community has been fairly calm.

“Yes, Sponsored Stories have been a part of our lives as marketers for quite some time now,” Cutts added. “As we’ve come to learn, though, social ad units, especially on Facebook, have a shelf life. For Sponsored Stories that time has come.”

What do you think? Will these changes improve your efforts to market to customers on Facebook, make them more difficult, or have little or no effect?