Grumpy Cat is Heading to Hollywood 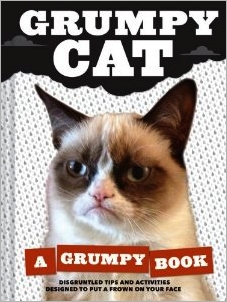 Grumpy Cat is headed from the computer screen to the big screen. Yes, the popular Internet meme is slated to star in an upcoming Grumpy Cat movie.

The movie is going to be a live-action family comedy movie with Grumpy Cat able to voice her dissatisfaction out loud. Broken Road Productions, the studio behind films such as “Paul Blart: Mall Cop” and “Jack and Jill,” will be responsible for bringing Grumpy Cat to the big screen.

Grumpy Cat’s agent secured the one-picture Grumpy Cat movie deal, terms of which were not disclosed.

While the venue may be different, being in front of the camera isn’t brand new territory for Grumpy Cat. The cat has already been the star of nearly 20 videos on her official YouTube channel. The channel has over 126,000 subscribers and some of the videos have over a million views.

Even before the Grumpy Cat movie deal, Grumpy Cat’s owners, Tabatha and Bryan Bundesen, had already built a successful brand around the sour-faced cat, even though they’ve said she’s actually very sweet and friendly.

To date, Grumpy Cat, whose real name is Tardar Sauce (spelled with a “d”), has nearly a million Facebook fans, over 92,000 Twitter followers, and over 66,000 Instagram followers. She’s made a number of public appearances to greet fans at events like South by Southwest.

She’s even the subject of a new book, “Grumpy Cat: A Grumpy Book,” scheduled to be released in July 2013.

Grumpy Cat first gained recognition from a post on Reddit.com in September 2012. Since then, the owners have created a website, sold Grumpy Cat merchandise, and even hired a manager who specializes in representing cats made famous on the Internet.

They also have filed for U.S. trademark protection to ensure they retain the intellectual property rights to images of their Grumpy Cat.

Annie Pilon is a Senior Staff Writer for Small Business Trends, covering entrepreneur profiles, interviews, feature stories, community news and in-depth, expert-based guides. When she’s not writing she can be found on her personal blog Wattlebird, and exploring all that her home state of Michigan has to offer.
2 Reactions
Subscribe
Follow @smallbiztrends
RSS LinkedIn Pinterest iTunes