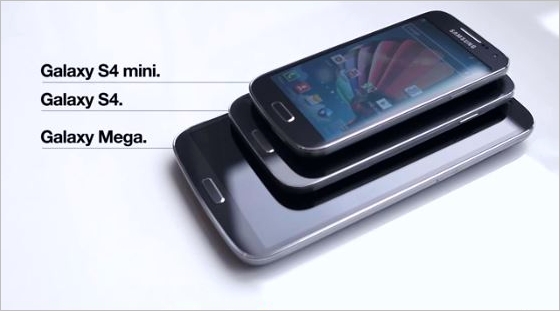 Samsung, which is known for its large smartphones, is now going smaller.  Samsung is expected to launch a lower end — and smaller — version of its Galaxy S4 smartphone in June.

Aptly called the Galaxy S4 Mini, the new phone is also expected to be cheaper than the $649.99 retail price.

Details have emerged about the new Galaxy S4 Mini phone in recent days.  BGR India reports on some of the technical specs of the new phone.  CNET provides a side by side comparison with the Galaxy S4 Mini.

The image above is the best way to understand the size of the new mini phone. It will be 4.91 by 2.41 inches and have a 4.3-inch display screen.

Internally too, the Galaxy S4 Mini will possess slightly less punch, with a 1.7 GHz dual-core processor compared to the 1.9 GHz quad-core of its big brother, and about 8GB of capacity and 1.5GB RAM compared to the 16 to 64 GB of capacity and 2GB RAM of the larger phone. But other features on the phone are comparable, with memory on both devices expandable up to 64 GB.

The camera is expected to be a less costly option for users who want a slightly smaller smartphone and don’t mind the slightly lower capacity.