Present Shock: Taking A Moment to Review the Future 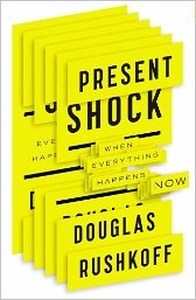 One of my best friends referred me to the book Present Shock: When Everything Happens Now after we debated about technology’s impact on society.

Are our lives better now with the technology that has become widespread?

Are we “better people” because we can share information so readily and instantaneously?

Those questions are particularly poignant when we think about the potential usage of gadgets and capabilities developed just in the last year. Google Glass.  The spread of mobile apps.  The anticipation of an automated driving car.

You can even look at the Amy’s Bakery Company debacle. Despite the eruption of opinions in that instance, one has to ponder the gigantic effort a small business can face when its reputation is in the combined hands of new tech (social media) and established tech (television).

The book’s author Douglas Rushkoff (@rushkoff) has more than a light interest in tech-induced behavior. An award winning social critic, Rushkoff has written numerous books examining societal views of technology. The life questions in his latest book can inspire small business owners to assess their own beliefs on what is making their business and lives better for themselves, their associates, their employees and the family and friends who support them.

Is This the Life We Really Want?

According to Rushkoff, we made poor assumptions about how our lifestyle would change with technology.  We thought we would be “futurists” – making the right predictions that matter.

Instead, we have found no zen state with the events that occur through technological usage.  Instead, Rushkoff notes, we have constant distractions, presuming that the information we have immediately before us is urgent.

The end result is a narrative collapse — losing a linear progression of events that forms a story.   We use narratives to tell the story about important events in our lives, let alone our business.  Today, our environment assimilates bits and pieces of information, producing outcomes that demand personal vigilance and management.

In addition to narrative collapse, Rushkoff summarizes other tenets to our digital environment:

Within these titles, Rushkoff makes relatively good distinctions on the core symptoms of his societal diagnosis and notes the offshoots from the outlined tenets.  Digiphrenia is meant to distinguish value from fragmented waste – the pay off is to not treat “data flows and databases interchangeably,” for example.

That ability to distinguish value flows well into topics about our society as a whole.  Check out how Rushkoff cites the Occupy Wall Street movement as a parallel to narrative collapse – with no goals from a narrative collapse, societal movements appear more frantic and extreme, sending a seemingly never-ending message stream instead of establishing an achievement.

It is not about winning some debate and going home. Rather, as the product of decentralized networked-era culture, it is less about victory than sustainability…. Occupy Wall Street is not a movement that wins and ends; it is meant more as a way of life that spreads through contagion and creates as many questions as it does answers.

As I see today’s analytics adopt more real time features, I do appreciate what Rushkoff sees. He outlines consequences that business can use as a starting point to understand if personnel are unnaturally aligned or if goals to integrate technology are unsustainable and unattainable.

Read Rushkoff’s citation of jet lag as an early example of an advancement impacting physiology:

But no matter how well technology overcame the limits of natural time, our bodies had difficulty keeping up….  Back in the 1950s, for example, when jet passenger service was still quite novel, Secretary of State John Foster Dulles flew to Egypt to negotiate the Aswan Dam treaty. His minders assumed he would sleep on the plane, and they scheduled his first meeting after they arrived. He was incapable of thinking straight, his compromised perceptual and negotiating skills were overtaxed, and he failed utterly. The USSR won the contract instead, and many still blame this one episode of jet lag for provoking the Cold War.

In its own way Present Shock extends the dialog highlighted in Against The Machine by Lee Siegel, but with less cynicism about how information is created. Siegel cautioned on the internet’s destructive nature to obscure promises of free expression and independence. Rushkoff counters by having the reader note the tradeoffs, bullish that the reader will pick up the alarms:

Instead of attempting to retrain the body to match the artificial rhythms of our digital technologies and their artifacts we can instead use our digital technologies to reschedule our lives in a manner consistent with our physiology…. Technology may have given us the choice to defeat our natural rhythms, but we then built a society and economic order around these choices, making them seemingly irreversible.

Much of the content is meant to appeal to readers who are not accustomed to reviewing code or software development, so a developer may not feel the book speaks to them.

But if you are reading other business books on technology you will imagine some useful parallels. Rushkoff’s discussion on reduced critical thinking parallels cautions being on customer service “autopilot” as Chris Zane warns in his book Reinventing The Wheel.   He highlights the always-on philosophy that works well for “many businesses” , while “our digital selves are distributed across every device, platform, and network.”

Rushkoff is a proactive critic – he shuttered his Facebook page, critical of its sponsored stories feature and subsequent data usage.   I think after reading this book you’ll become pretty proactive in setting your own technological strategy.

Pierre Debois is Associate Book Editor for Small Business Trends. He is the Founder of Zimana, a consultancy providing strategic analysis to small and medium sized businesses that rely on web analytics data. A Gary, Indiana native, Pierre is currently based in Brooklyn. He blogs about marketing, finance, social media, and analytics at Zimana blog.
6 Reactions
Subscribe
Follow @smallbiztrends
RSS LinkedIn Pinterest iTunes