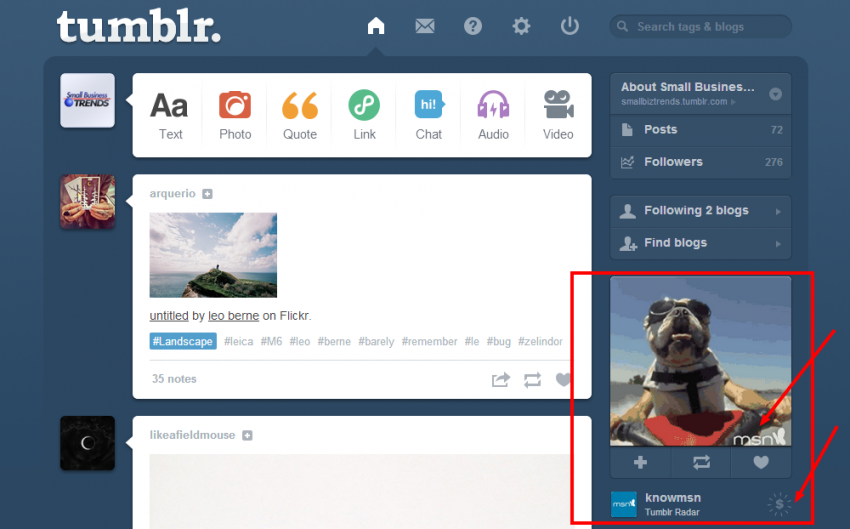 Tumblr has added sponsored posts to its Web dashboard, and not all users are happy. Some are saying “told you so,” believing the move is somehow related to Yahoo’s acquisition of Tumblr.

In an official post on the Tumblr blog, VP of Sales Lee Brown explained, “Since we launched our first sponsored post on Tumblr Radar one year ago, we’ve been proud to see our partners bring their most creative work to Tumblr. Their posts have already earned more than 10 million likes and reblogs.”

“Today, we’ll start to bring sponsored posts to your Dashboard on the Web. Just like in our mobile apps, these posts will simply blend in with the posts from the blogs you follow,” Brown wrote.

Tumblr sponsored posts will be designated with a little dollar symbol in the upper right hand corner of the post.

The Push to Monetize Tumblr

For the uninitiated … the dashboard is the place you see when you log in to your own Tumblr account. It’s where you see posts of those you follow, or ones that Tumblr suggests.

Nor is the concept of sponsored posts new to Tumblr. This recent announcement is merely an expansion of the number of places where you will see sponsored posts. As Lee noted, the platform launched its first sponsored posts a year ago on Tumblr Radar, which is the company’s Tumblr account.

In the Small Business Trends Tumblr dashboard we already see small sponsored ads from the Radar blog, on the right siderail (see image above with red arrows pointing to a sponsored message). We did not show you the new sponsored posts in the main column — simply because we have yet to see any in our dashboard stream.

This move would expand sponsored posts to appear not just on the siderail, but also in the main column mixed in with other posts of Tumblr blogs you follow.

This is in addition to sponsored posts that Tumblr introduced to its mobile app last month.

TechCrunch reports that Tumblr founder David Karp had always planned to use sponsored posts to eventually monetize the site.

Nevertheless, some users blamed the change on the recent announcement that Yahoo would be acquiring Tumblr for $1.1 Billion.

Others seemed simply not to care: