7 Free Tools to Find Twitter Influencers Who Interact with You 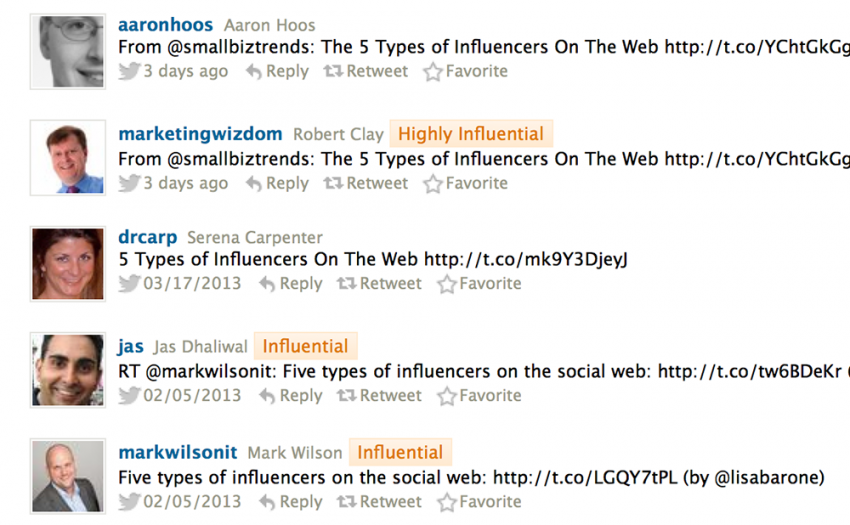 Twitter was the first social media network that made influencers more reachable. It has never been easier to pitch to someone who can make an impact (and thus become influential as well). Knowing who influences your potential customers and winning their trust is gold… yet it’s not easy.

The first step in influencer marketing is identifying those influential people who are already interacting with you: Those are your most effective targets because you have already managed to get their attention.

Below are 7 free tools I am using to interact with influencers who know me or are familiar with what I do.

Who Tweeted Me is a new tool from Hubspot that finds all people who tweeted your pages and sorts them by number of followers. You can thank them with one click as well: Topsy is another good tool to try here especially since its browser bookmarklet has made it so easy to get the data: Topsy Trackbacks (to install, simply drag it to your browser bookmarks toolbar) – simply click it when you are reading the page you want to analyze and you’ll be taken to Topsy results. Now scroll through results until you see “Influential” or “Highly Influential” flags:

Commun.it is an absolutely awesome tool for keeping track of Twitter users who have recently interacted with you: That’s one of the most robust influencer-management Twitter tools I have ever used. New Klout “Moments” feature is another interactions manager you need to look into. You can control which “Klout” score users who have recently interacted with you have.

You can interact with your influencer’s interactions (I know that sounds funny, by the way) by replying (e.g. to thank) and retweeting right from the Klout page: Kred is another free tool that will list your recent interactions and sort them by its own score called “Kred.” To thank users you can “Kred” them: Friend or Follow is an interesting tool that, among other features, grabs all your “fans” (people who follow you but who you are not following back) and sorts by the number of followers. You can follow them back right from that page as well: I like it that it shows “verified icon” overlaying the Twitter avatar which makes it easier to find “real” influencers following you.

Fruji is another great option here. What I like most about this tool is that it breaks your followers into groups by the number of followers. Another cool thing is the YAS Factor (You Are Special), indicating a higher chance of that person noticing your tweets.

What other free tools are you using to interact with Twitter influencers in your network?