69 Percent of U.S. Entrepreneurs Start Their Businesses at Home 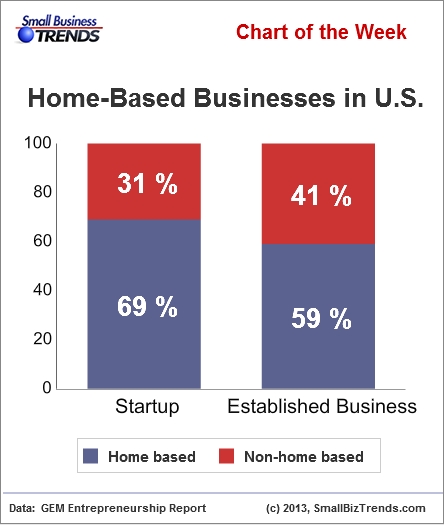 If you operate your business from home, you’re not alone. A recent survey of U.S. businesses indicates the majority of entrepreneurs do the same.

And that’s not just in the startup phase either. According to the 2012 Global Entrepreneurship Monitor report (PDF), more than half of U.S. entrepreneurs continue to operate their businesses from home long after those businesses are up and running. The study examined Total Entrepreneurial Activity (TEA) across industry sectors in the U.S.

It’s also a mistake to think of the majority of these owners as so-called solopreneurs who never grow their businesses beyond a staff of one. Study authors observed:

The sense of awe in that statement — that home based businesses “actually” have employees — is interesting. It shouldn’t be surprising that so many businesses are being run out of entrepreneurs’ homes. Today in many businesses, work is done “virtually.” Workers’ technology (computers, mobile devices and Internet connections) is much more important than their physical workspace, especially in knowledge businesses.

Stats on Home-Based Businesses and Entrepreneurship

Here are some additional factoids of interest from this fascinating study:

It costs less than you might think to get a business off the ground — According to the study, entrepreneurs required a median of $15,000 to start a business. On the one hand, that’s a lot.  But on the other hand, it’s an amount that many people in the United States can save up or raise from family.  Keeping overhead costs low is a key driver of starting a business at home.

Most startups are self-funded or family/friends funded —  The vast majority of startup funds (82%) came from the entrepreneur himself or herself, or family and friends.

Venture capital is rare – Only one in 1,000 entrepreneurs in the United States receive venture capital  funding, according to a finding cited from an earlier study in 2009.  In other words, forget about venture capital. You’re better off spending your time growing your business than searching for VCs.

Entrepreneurship is not limited to a certain age group — Roughly 15% to 20% of adults across all age groups are entrepreneurs.

Women entrepreneurs are more likely to have home-based businesses — Among startup businesses that operate out of the owner’s home, 72% are operated by women — versus 61% of men.  Among established businesses more than 3 and a half years old, 68% of women still operate the business from home, versus 53% of men.

Senior citizens who continue to work tend to be entrepreneurs — Many seniors, of course, are retired.  But of those still working, more than 42% run established businesses (i.e., businesses more than 3 and a half years old).  About 10% are starting or running new businesses of less than a few years old. And over 25% intend to start a business.  So if you want to stay actively working in your senior years, consider your own business.

Businesses not only are started from home, but tend to be run from them — The 2012 survey says 69% of businesses now start in the home. And 59% of established businesses more than 3 and a half years old continue to operate from there.

More businesses are consumer businesses than any other type —  We all know home businesses can include services like freelancing, independent contracting, consulting and virtual assistance.  But the 2012 study shows only 33% of all businesses surveyed fall into this category.

Another 41% of businesses include companies in the consumer sector. This could include hotels, restaurants or real estate. But it could also include Internet businesses based from home like eCommerce.

Other businesses covered in the survey are “extraction” businesses concerned mainly with natural resources like farming, mining and forestry and “transforming” businesses like manufacturing. These are usually capital intensive and so unlikely to include many businesses started in or operated from the home.

The study did not break down how many of each industry sector specifically are home based, however.

Why This Study is Important

The U.S. study was completed by researchers at Babson College and Baruch College who interviewed about 6,000 respondents.

This study tends to look broadly on the economic contributions of entrepreneurs who otherwise get short shrift in standard government statistics. For instance, recognizing the prevalence of home-based businesses is important, and recognizing that they employ people and outsource services is also important.  Recognizing that outsourcing helps grow employment in other companies is another positive point.

The way entrepreneurs run businesses in this country is very different from the government’s rigid (and limited) ways of measuring employment and economic impact.  It’s good to see a stellar source like the GEM Report and Babson calling attention to some of these structural changes.

Anita Campbell is the Founder, CEO and Publisher of Small Business Trends and has been following trends in small businesses since 2003. She is the owner of BizSugar, a social media site for small businesses.
44 Reactions
Subscribe
Follow @smallbiztrends
RSS LinkedIn Pinterest iTunes