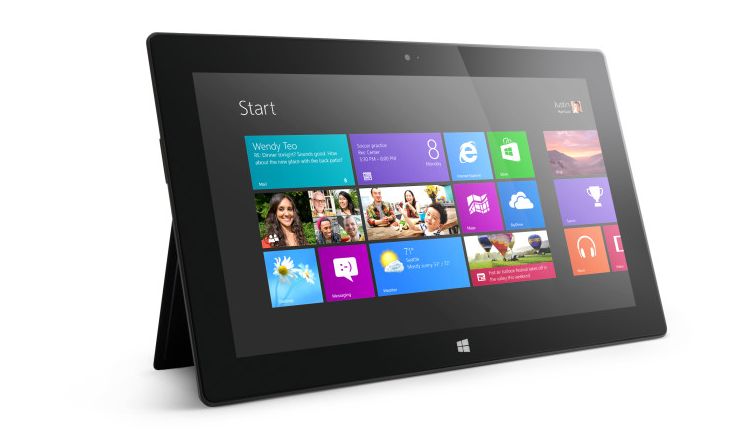 Microsoft yesterday announced disappointing earnings.  The software giant took a charge of $900 Million on its Surface RT tablets, and announced it would offer a $150 per tablet discount.

Before the price drop the Surface RT cost $499. The 32 GB version (without the keyboard touch cover)  is now being advertised around the Web at $349. For instance, Staples and the Official Microsoft Store have it at the $349 sale price.

The price drop does not affect the higher-end Surface Pro tablet, which starts at around $900.

The Surface RT runs the RT version of the Windows operating system, while the Surface Pro tablet runs the full Windows 8 operating system.  Windows RT differs in a number of ways from regular Windows 8.  The main thing to keep in mind is that it’s more limited. Software that works on earlier Windows versions won’t work on Windows RT.

That means, the Surface RT won’t be quite as useful to business users who may require a tablet capable of being a desktop or laptop substitute.

For business users, the Surface Pro offers more functionality.  With the snap-on keyboard the Pro tablet can truly substitute for a larger computer.

Still, at a price just under $350, the Surface RT is competitively priced with other tablets of similar size. So if you aren’t too worried about using a lot of software programs on a tablet — and mainly want it for email, social networking and Web browsing — the discounted surface RT could be a good bet.

Microsoft has unsold inventory of Surface RT tablets that it needs to move.  VentureBeat writes, “While it’s easy to view this as Microsoft losing faith in the Surface RT, the price reduction is also a necessary step to clear out stock and make room for newer models. At its Worldwide Partner Conference this week, Microsoft noted that Surface upgrades are on the way this year….”

But don’t hold your breath waiting for discounts on the Surface Pro.  BusinessInsider quotes a Microsoft representative as saying Microsoft doesn’t have the same backed-up inventory with the Pro tablet.