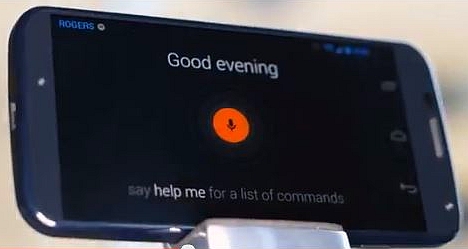 If you’re planning to buy new smartphones for your business this summer, better hang on. Motorola is expected to introduce four new phones soon including its new “flagship,” the Motorola Moto X, and three Droid phones specifically for Verizon Wireless. All four phones represent a significant milestone. They are the first phones to be introduced by the mobile pioneer since it was acquired by Google last year.

The new smartphones are led by the Moto X expected to compete directly with the Apple iPhone 5 and Samsung Galaxy S4. The device could retail for about $599, reports the Wall Street Journal. However, another source, TheVerge.com, speculates a much lower price around $199 to give Motorola a foothold in the affordable smartphone market.

One of the first glimpses of the new Moto X is offered through a promotional ad from Rogers Communications, a Canadian telecommunications company.

The ad shows a phone available in simple black or white and equipped with Google Now, an intelligent personal assistant app designed by Google to listen and respond to questions. Without ever needing to touch the screen, the user can get directions, set alarms and more simply by speaking.

The new phone also includes “active updates” which let you know about information like incoming e-mails with silent on-screen notifications allowing you to decide what demands your immediate attention.

Moto X also boasts a simple to use camera. Two twists of your wrist with phone in hand activates the camera feature and simply touching the screen allows you to snap photos. See the full ad in the video below.

Another report earlier this month from ABC News suggested the Moto X would also be available in a pallet of colors, with custom wallpaper and custom engraving, a feature initially introduced by Apple with the iPhone.

The Wall Street Journal reports Motorola will be limiting the amount of software and other apps, sometimes called “bloatware,” installed by carriers selling the device.

A recent tweet from EVLeaks shows a glimpse of the three new phones.

Specifications for all three devices remain a mystery but a report from TheVerge.com suggests they will be available in a variety of colors and will be durable being described by one website as being “tough as steel.”

The Droid Ultra  may be priced in the $199 range when purchased under contract with the carrier while the Maxx is expected to cost a bit more due to its longer battery life. All three phones, like the Moto X, are expected to be introduced later this summer.