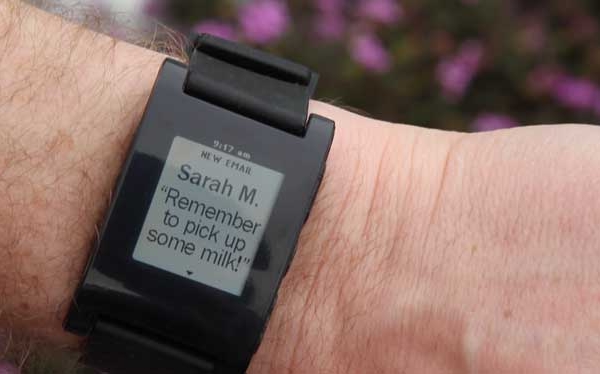 Sometimes it seems like all eyes are glued to our smartphones.  Go to an airport, and it seems like everybody waiting for a plane is looking at a phone.  Even when it would be a breach of business etiquette to look at your phone, such as in meetings or at conferences, many of us find it hard to resist pulling the phone out and sneaking a peek to check messages or Twitter updates.

But now you don’t need to pull out your phone.  Instead, you might just casually glance at your wristwatch — your Pebble smartwatch, that is.

Pebble Watch is a smartwatch developed by Pebble Technology. Its development was funded via Kickstarter, where it raised a record $10 million.  Pebble’s smartwatch started shipping to its backers in early 2013, and has been available for sale on the Pebble website.

Now it is about to hit retail stores.

The jet black version will be available  July 7th at Best Buy stores, for $149.  Other colors, including white and orange, will still only be available at the Pebble website for now.

Pebble doesn’t replace your smartphone, but instead works with it.

Pebble connects to your iPhone or Android device via Bluetooth. You download the Pebble app onto your phone.  Then information is transmitted to the watchface.  For instance, you can check emails on it, or caller ID to see who’s calling you.  You can access Twitter and Facebook updates with it.

Pebble is not the first smartwatch to be invented.  Sony, for instance, offers a smartwatch that works with some Android devices.  But Pebble is the first one that has captured wide interest among the public. More importantly, Pebble has a growing community of third party developers extending its functionality through apps.

When the Pebble was first shipped to Kickstarter backers in March of this year, one of the complaints was that it was fairly limited in the kinds of ways you could use it.  But in the few months since then, third party developers have been developing apps to extend the usefulness of the Pebble smartwatch. Pebble actively encourages third party developers.

Pebble is great for sports and hobbies. A lot has been written about how if you’re a cyclist, runner or golfer you can use Pebble as a bike computer, accessing the GPS on your smartphone to display speed, distance and pace data.

But we see the potential for using Pebble for business.  As a business owner you can use Pebble to stay on top of things with notifications, messages and alerts.  For instance, you can pair up Pebble to give  notifications you set up with “notification recipes” through IFTTT.com.

You can even dismiss a notification with a shake of your wrist. Disabling all notifications is simple as well.

Here are just some of the notifications your Pebble natively gives you:

Apps and native support for certain tasks vary based on whether you’re using it with an Android device or an iPhone.  Be sure to check for availability of specific functions on the phone platform of your choice.

Each week more third party apps are being developed to further customize and extend the usefulness of the smartwatch.

You can be notified when your next meeting is going to begin. Or what time the next bus or train is so that you won’t be late even if you are engrossed in work. If you’d like a quick power nap between meetings then check-in on your watch, or create an app that can monitor your sleep. You can even use this feature to monitor time taken to complete tasks like replying to emails, writing reports and printing them.

Want to play some music to give an interesting twist to a presentation? You can use the music control app to play, pause or skip tracks on your phone with the touch of a button.

There’s a lot of potential. While the mobile device category of the smartwatch is still young, it holds promise.

Zac Honig of Engadget gives an overview of Pebble’s setup and basic functions in the video below.