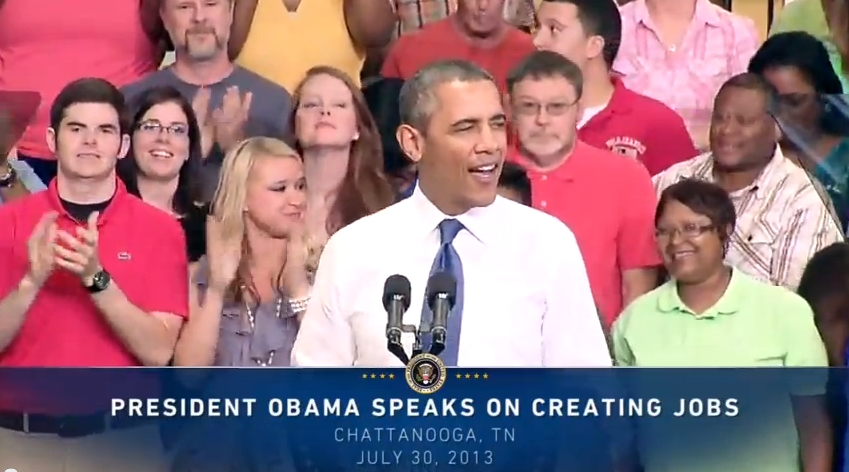 President Obama gave a speech at an Amazon.com fulfillment warehouse in Chattanooga, Tennessee yesterday pointing to Amazon as an example of a job creator.

Independent booksellers and small publishers don’t see it that way.  They were angry.  They see the President’s action as supporting a large corporation that they claim has a monopoly, at the expense of small businesses.

In his remarks at the behemoth Amazon warehouse, President Obama said, “I’m calling on our businesses to do more for their workers.  Amazon is a great example of what’s possible.  What you’re doing here at Amazon with your Career Choice Program pays 95 percent of the tuition for employees who want to earn skills in fields with high demand — not just, by the way, jobs here at Amazon, but jobs anywhere —  computer-aided design or nursing.  I talked to Jeff Bezos yesterday, and he was so proud of the fact that he wants to see every employee at Amazon continually upgrade their skills and improve.”

But the independent players in the book publishing industry weren’t buying it.

Dennis Johnson, co-founder of Melville House, an independent publisher located in Brooklyn, New York, wrote with obvious resentment about what he considers Amazon’s near monopoly status, its ability to undercut competitors, lose money and yet on top of that, still get lauded by the President as a champion of jobs.  In a separate piece yesterday on his company’s blog he called the President’s move an “insult added to injury to those of us in the book business.”

NEIBA demanded to know, “What is the thinking behind this decision? . . . [Amazon’s] business model is based on fighting those states that have required them to collect and remit sales tax while driving Main Street brick and mortar stores out of business through predatory pricing.”

“We cannot believe this is your vision of job creation and the future of American middle class,” wrote NAIBA. “We would hope your administration would be standing with Main Street, and investigating the monopolistic practices of Amazon, rather than explicitly or tacitly endorsing those practices.”

Just prior to the President’s speech, Amazon announced it is creating 5,000 new jobs at its fulfillment warehouses.  The jobs will pay wages 30% higher than traditional retail jobs, says the Amazon announcement.  According to Geekwire, Amazon’s most recent financials indicate it now has nearly 97,000 employees.  That number is triple what it reported just three years ago.

Amazon plans to release an interview it does with President Obama, as a free Kindle Single today.