Sage One Gets Enhancements to Appeal to More Small Businesses 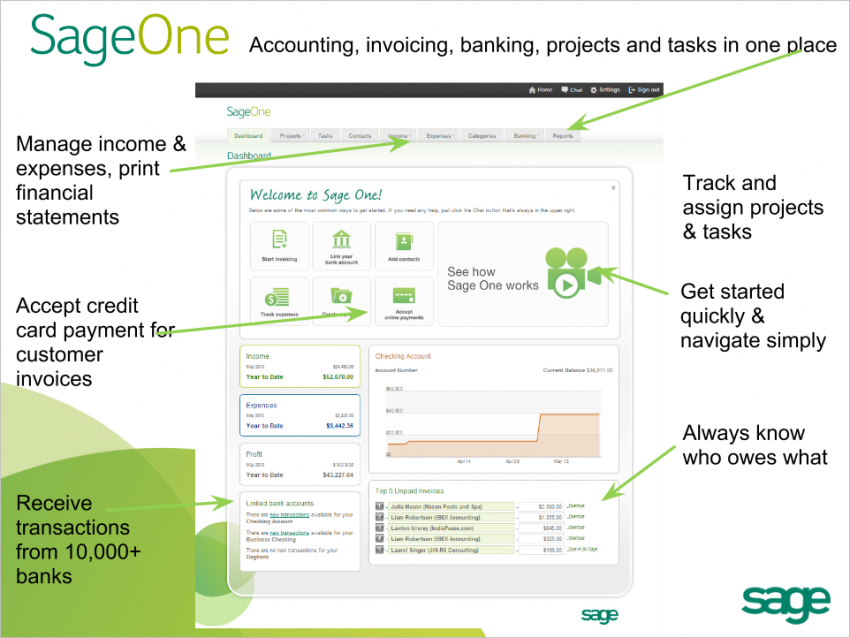 Annual customer conferences are typically a time to announce new products and enhancements to existing products. And the 2013 Sage Summit is no exception.

The software company announced this week that Sage One, its cloud-based accounting, project management and invoicing solution for small businesses, is getting enhancements.

According to Mike Savory, Sage One Product Manager for Sage North America, an iPhone app is coming in August. The mobile app is something business owners asked for so that they can perform work on the go, no matter where they are.

Then the fourth quarter of 2013 will see the introduction of Sage One Accountants Edition.  This is a module that will allow a business owner’s accountant or outside bookkeeper to log in securely to the business’s financial records on the Sage One cloud platform.  There will be no charge for an accountant to use the Accountants Edition. It will make the product more efficient for small businesses so that they don’t have to manually pass accounting records back and forth with their outside accountants.

A Canadian version of Sage One is also coming in the fourth quarter of 2013.  It will have bilingual (French and English) support, as well as integration with Canadian banks.

In addition, two new levels of the product will be launched. This autumn will see the launch of Sage One Basics in the United States.  Sage One Basics will consist of a streamlined, online invoicing and payments application.  It will carry a lower price point than the existing product, which is priced at $24 per month.

In 2014 a higher-end level is coming, called Sage One Extra.  Sage One Extra will be a “true multi-user system” says Savory, and will add additional features.

According to Connie Certusi, Executive Vice President and General Manager of Small Business Solutions for Sage North America, Sage One Extra will be more attractive to somewhat larger small businesses.  Currently the sweet spot for Sage One  is for a small business with under 10 employees, although businesses up to 20 employees may also use it today.  Sage One Extra edition will include more inventory management capability and other features appealing to the larger end of that range, up to around the 25-employee business, Certusi said.  The addition of Sage One Payroll in 2014 will also increase the appeal to small businesses that have a number of employees. 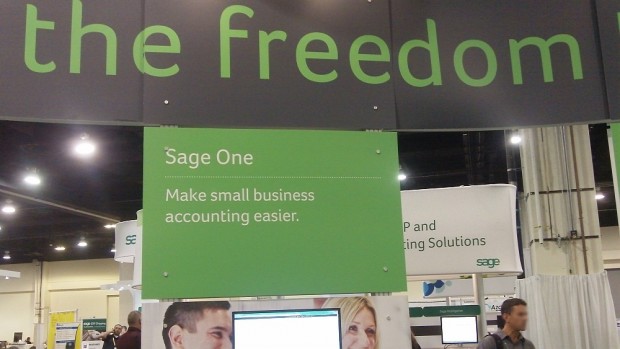 Sage One: A Young Product

Sage One was launched in the United States in the spring of 2012.  Since then it has seen several enhancements. Among the added enhancements is the ability to accept mobile payments and electronic payments  on invoices, as we reported in February.

The company also added bank integration this year.  Customers can now download transactions from over 10,000 banks in the United States and import them into the Sage One online system (avoiding manual keying of data for each banking transaction).

Behind the scenes the product was also completely reworked to use a common global technology platform. Savory told us in an interview, “That’s not something customers see, but it’s important because it will allow us to speed up product enhancements going forward.”  Sage has a presence globally. In the past each Sage country unit more or less created its own technology – now they will share common technology on the back end.  “On the front end there will always be product differences because of differences in the way business is conducted in different countries, different languages, different tax jurisdictions and different currencies,” Savory said.

Enhancing the product is something that goes on continually, Savory added.  “We employ ‘agile development’ and make a regular stream of product improvements every two weeks, based on customer feedback.”

Analysts and small business experts we talked with at the conference generally were positive on Sage One and the product direction.  However, they see Sage North America as having work ahead of it to increase market adoption.

Said Laurie McCabe, an analyst and Partner in the SMB Group, “CEO Pascal Houillon has been proven right in his strategy of unifying under one brand name [Sage] in order for Sage North America to gain market awareness and grow.  One of Sage’s challenges is how to get new customers.  Sage One is one of several answers. With that product they’re drawing in the small business that today is using paper or spreadsheets.”

But, she adds, Sage One’s current situation demonstrates how much work is left, as well as how much opportunity is available.  Out of Sage’s six million customers worldwide, about 10,000 use the Sage One product — “a small number when you think of how many millions of very small businesses are in the United States.  It demonstrates a market opportunity. But to capture that opportunity the company needs to increase awareness. They also need to be found in every app marketplace out there — the Google Apps Marketplace, and more.”

Expert Barry Moltz agrees that Sage North America needs to “get the name out there” more.  “Awareness among really small businesses is the key.”

Sanjeev Aggarwal, Founder of the SMB Group, suggests that one avenue toward expanding awareness could be developer partners. Sage One is now poised for developer partners to “add value to the product.” He adds, “Sage has created the building blocks for developers to step up and extend Sage One by adding features and integrating with other products.”

Anita Campbell is the Founder, CEO and Publisher of Small Business Trends and has been following trends in small businesses since 2003. She is the owner of BizSugar, a social media site for small businesses.
17 Reactions
Leave a Reply Cancel reply
Subscribe
Follow @smallbiztrends
RSS LinkedIn Pinterest iTunes