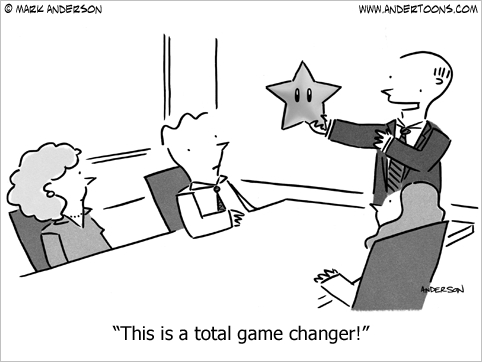 You end up doing a lot of strange research as a cartoonist.

I’d run across the phrase “total game changer” and thought it would be fun to do a cartoon where someone gets something from a video game that fundamentally changes things. Hence the power-up star from Super Mario.

But I had to take some time and dig into Super Mario power-ups to make sure it worked and made sense. The Super Mushroom? Good, but not big enough a change for the joke. Fire Flower? OK, but what sort of advantage would that give a businessperson?

So I settled on the Star and temporary invincibility. Recognizable, powerful and iconic.

OK, back to work. I need to find some good pictures of kangaroos and get up to speed on the Bermuda Triangle.