You’ve probably used Twitter as a professional networking and marketing tool. But you may wonder whether Twitter actually leads to more sales.

It turns out a recent survey by Market Probe International answers that question.

Conducted on behalf of Twitter, the research firm surveyed 500 people over the age of 18 in the US and the UK who regularly follow small to medium sized businesses on Twitter.

Results were published on the official Twitter advertising blog today.

The upshot of the survey is that Twitter can have an impact on small businesses — and that getting Twitter followers matters.  And in fact, Twitter set up the hashtag #FollowersMatter, to emphasize those results.

If you’re looking for ROI from your social media efforts, there are some impressive statistics coming out of this study (illustrated in the infographic below):

If you’re trying to figure out how to get more followers for your business on Twitter, the survey has some clues.  Look at WHY people follow small businesses on Twitter.  If you know what they are looking for from you, you know what kind of information to give them through your Twitter feed: 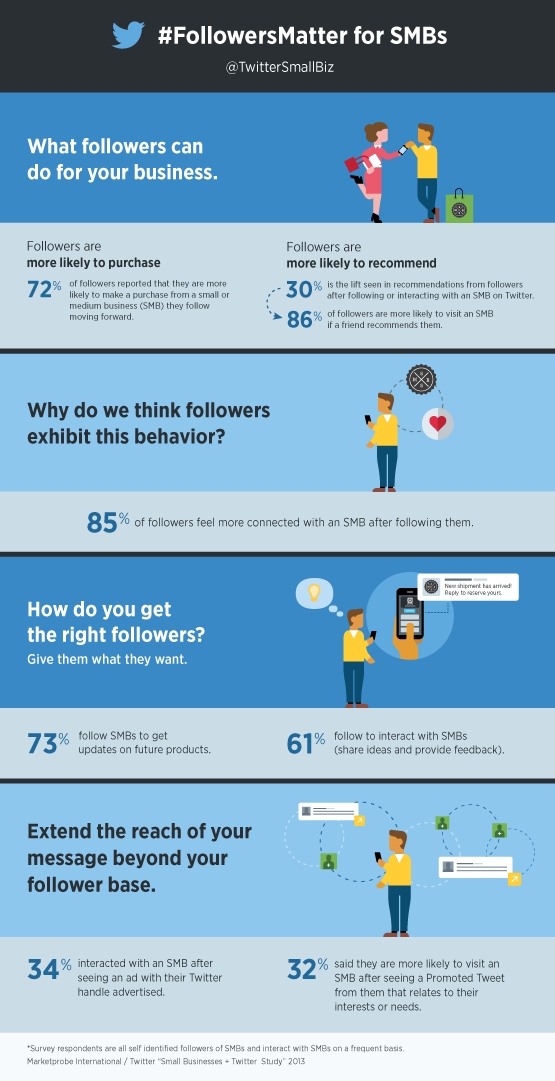 Shawn Hessinger is the Executive Editor for Small Business Trends and a professional journalist with more than 20 years experience in traditional and digital media for trade publications and news sites. He is a member of the Society of Professional Journalists and has served as a beat reporter, columnist, editorial writer, bureau chief and managing editor for the Berks Mont Newspapers.
23 Reactions
Subscribe
Follow @smallbiztrends
RSS LinkedIn Pinterest iTunes