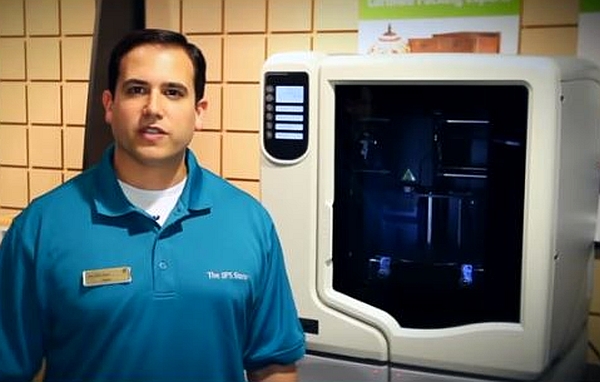 If the cost of owning a 3D printer is holding your business back from taking advantage of its benefits, The UPS Store plans to lend a helping hand.

The franchise retail division of UPS recently announced that it is offering 3D printing capabilities at some of its locations. The idea is being tested first in the San Diego area. The company expects to expand the service elsewhere soon.

In a prepared statement, Michelle Van Slyke, vice president of marketing and small business solutions at The UPS Store explains:

Start-ups, entrepreneurs and small business owners may not have the capital to purchase a 3D printer on their own, but they may have a need to show prototypes to their current and potential customers. By offering 3D printing capabilities in-center, we’re able to help further our small business customers’ opportunities for success.

3D printers start at over a thousand dollars and take up considerable space so it’s not feasible for some small businesses to purchase their own, especially for only occasional use.

A recent poll of small businesses by The UPS Store discovered interest in the service for creating artistic renderings, prototypes and promotional materials, the company said.

Select UPS Stores will be equipped with a uPrint SE Plus 3D printer. These units can print up to nine colors and are capable of creating usable prototypes. Stratasys, the company that makes the printer, says it uses ABSplus thermoplastic to build its 3D renderings.

For more on the technology and the service see the video from The UPS Store below.