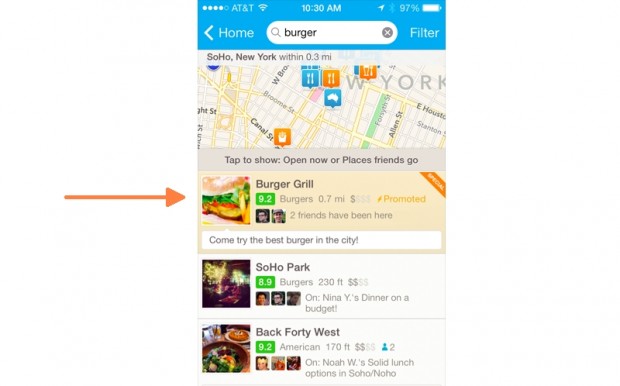 Back in June we reported that Foursquare was offering a paid promotions program to New York City based businesses in a limited pilot.

Today Foursquare announced that its paid ads program now is open to all small businesses.  The company says it has 1.5 million claimed-business users.  The expanded ad program would give business access to consumers in the pool of 40 million consumers that use Foursquare.  An update on the company’s blog notes:

“Here is a problem that all local business owners know: They want to get more customers, but tons of people walk by their storefront without coming in. We created Foursquare Ads to solve this problem. We can connect great local businesses with the people nearby that are most likely to become customers.

Today, we’re opening Foursquare Ads to all small businesses around the world. We’re moving past the days when business owners have to figure out if a “like” or a “click” has any meaning in the real world; now they can tell if someone who saw their ad actually walks into their store.”

Ads appear at the top of the user’s list, in a different color along with the word “Promoted” next to them (see image above next to the arrow).

Businesses can create an ad using the Foursquare ad platform online or via mobile.  Businesses will only be charged for a consumer who actually “acts on your ad – either by tapping to see your business details or by checking in at your business.”

Right now American Express is offering a $50 ad credit to U.S. based small businesses to try the new Foursquare ads.

Nothing else about how you use Foursquare as a business appears to have changed.  It remains to be seen whether this will result in less activity unless you pay for it.