How Do You Use Hashtags? 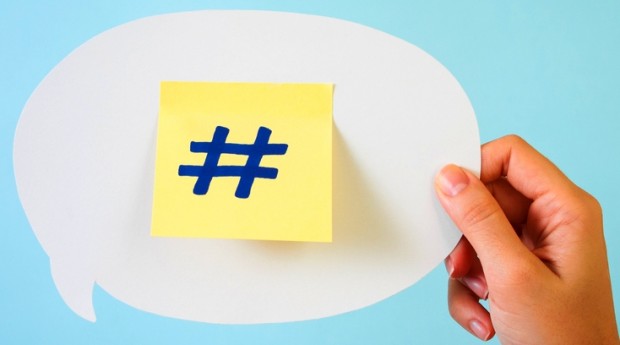 If you use social media, there’s a good chance you use hashtags or you’ve seen hashtags used to increase visibility and categorize posts. But you’ve probably also seen people use hashtags excessively and without any real purpose or value.

In fact, the hashtag has become so much a part of pop culture that comedian Jimmy Fallon and singer Justin Timberlake recently created a comedy skit mocking their overuse. Here’s a clip:

So How DO You Use Hashtags?

You might already be asking, “What is a hashtag and how do you use one?”

Well, hashtags originated on Internet chat networks before becoming more widely used on microblogging sites like Twitter. Hashtags consist of a word or phrase preceded by a # symbol. This allows users to group posts into categories and easily search for other posts that use the same hashtags.

Since those early days, hashtags have been introduced on a number of other sites, including Facebook, Instagram, Tumblr, Pinterest, Google+ and Flickr. They serve roughly the same purpose on each of these sites, but the way they are perceived can be very different. 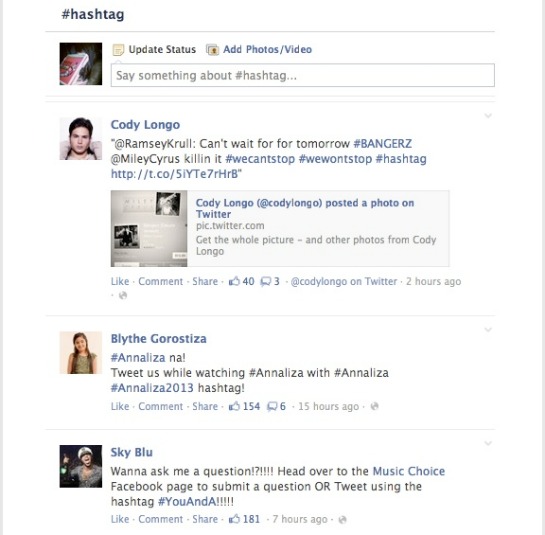 A recent study by EdgeRank Checker found Facebook posts with hashtags actually have far less viral reach and engagement per fan, on average, than those without. But the study also found that when you use hashtags in tweets, those tweets are almost twice as likely to be retweeted.

On both sites, you can search or click on a hashtag to view real-time results. But on Twitter, a popular hashtag might yield constantly updating results, whereas the same topic on Facebook often doesn’t yield nearly as many. Part of the reason is likely that Twitter has used hashtags for a longer period of time and they are more popular there.

But another reason may have to do with the format of each site. On Twitter, users create their own posts to respond to other users. On Facebook, if people have a response, they simply comment on the original post. This creates fewer posts within the same conversation and less necessity for hashtag to designate a shared topic or discussion. 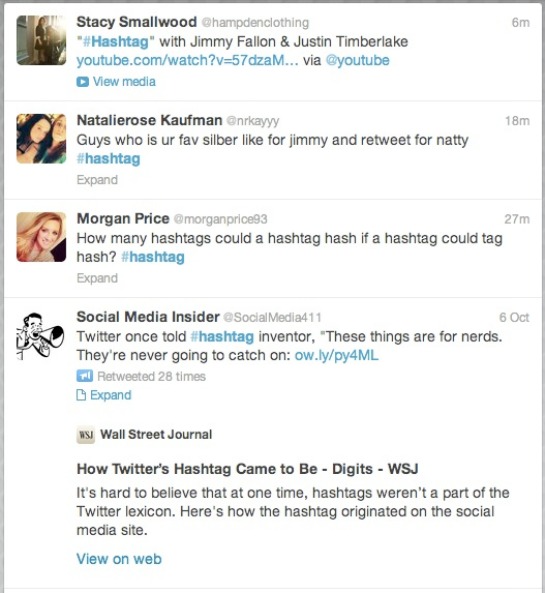 Twitter was one of the first sites to use hashtags. And as stated earlier, studies have shown Twitter hashtags to be effective for engagement purposes. But there are still guidelines to consider.

For example, the overuse of hashtags can turn off some users, says Ken Mueller at Social Media Today. He explains:

When people see too many hashtags, their eyes glaze over. It looks like spam.

Mueller suggests doing some research prior to choosing hashtags to see which ones garner the types of quality interactions you’re looking for. He also suggests choosing just one or two relevant hashtags per post.

Singapore-based blogger Jiong Hong of SMM Insight agrees. He says not enough marketers consider the consumer side of hashtags, adding:

Usually, marketers find out how often a hashtag is tweeted before using it. They are wary of nonexistent and overused hashtags, which would affect the reach of their tweets. Good. But past this test, marketers rarely do any further research or follow-up with hashtags. 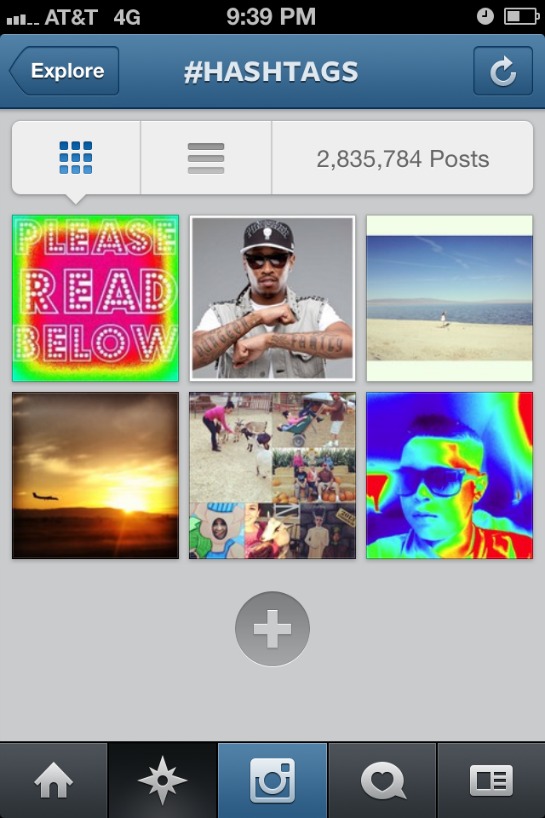 But not all sites experience the same trends when it comes to hashtags. A study by Dan Zarella of Hubspot found Instagram posts using hashtags had a much higher like-to-follower ratio than those that did not.

However, the same study found some of the most effective hashtags in terms of likes were things like #followforfollow and #likeforlike. So these may not garner the type of quality interactions that business and professional users often seek. 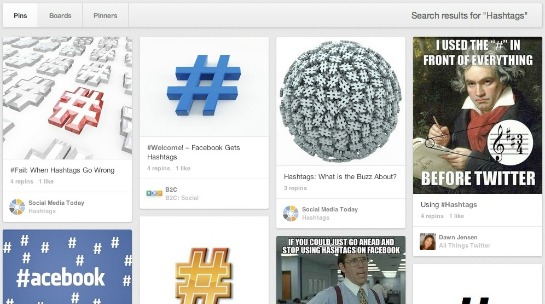 Hashtags in pin descriptions on Pinterest can be clicked to reveal a search of that phrase. But hashtag searches can also reveal pins that include similar words or phrases in the description or link sans hashtag.

So is there any real benefit if you use hashtags on Pinterest?

Kate Dunham of The uberVU Blog thinks so, but not for the simple purpose of gaining followers and visibility. Instead, she suggests using Pinterest hashtags more for monitoring brand engagement:

Since search works a bit differently on Pinterest, it’s best to create hashtags for your company or brand that are totally unique – the more specific the better… Plus, if you run a contest asking people to pin with your hashtag, having a very specific one will make your job of searching through the entries that much easier. 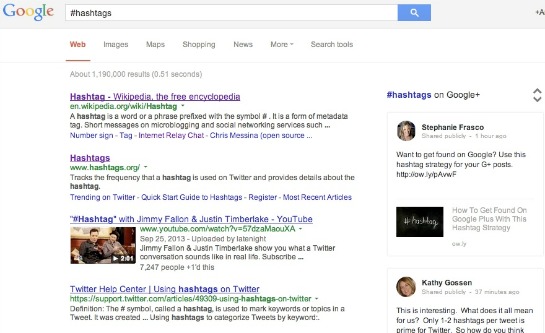 Google has even begun including hashtags in search results. Zaheed Sabur of Google shared the announcement in a Google+ post recently. Entering a hashtag into the main Google search bar reveals related Google+ posts to the right of regular results, Sabur explains. You may also see links to searches for those hashtags on other social media sites.

So now that we’ve delved into the pros and cons of hashtags on many different social channels, what does all of it mean for your business?

Krista Bunskoek of Wishpond suggests using hashtags for branding or campaign purposes across all of your social accounts. She explains:

You create your own brand hashtag. Make it your company name or a tagline that people know (or will know) about your business. Use it as your central business tag, that you – and your customers – can use anytime, and on any site.

According to Twitter, #SuperBowl was used 3 million times over about five hours on Super Bowl Sunday this year. Look at all those people who might be interested in our jokes about Beyonce! And yet getting any single person’s attention is just short of impossible, like a single Niagara droplet screaming for notice as it shoots down the falls.

In fact, Charlie Warzel of BuzzFeed thinks hashtags might simply no longer serve a real purpose:

What was created as a means for organization, discovery, and reach may have outlived its usefulness.

Do you use hashtags for your marketing efforts?

Annie Pilon is a Senior Staff Writer for Small Business Trends, covering entrepreneur profiles, interviews, feature stories, community news and in-depth, expert-based guides. When she’s not writing she can be found exploring all that her home state of Michigan has to offer.
16 Reactions
Subscribe
Follow @smallbiztrends
RSS LinkedIn Pinterest iTunes