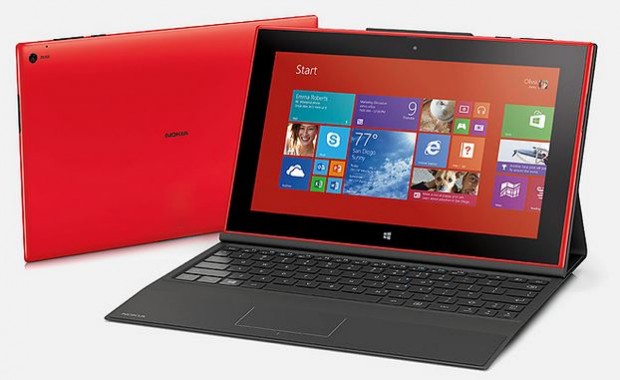 It also runs Windows 8.1 RT, is loaded with Microsoft Office and has a price tag of $499. So it may be another viable alternative to the 9.7-inch iPhone Air for small business owners who prefer a Windows operating system and Microsoft tools on their mobile device.

A hands on overview from The Verge shows more of the device’s features:

The video shows a keyboard cover that, when opened up and magnetically slid into place, gives the Lumia 2520 a quasi-laptop look. (An optional power keyboard and stand are available for an additional $149 and add a potential five extra hours of battery life.) When closed, the cover wraps around the device protectively like a book.

A unibody design and Corning’s Gorilla Glass on the screen further protect the device, making it look like a rugged travel companion.

Other features mentioned by Nokia when unveiling the Lumia 2520 at Nokia World last week in Abu Dhabi included a 6.7MP rear camera and 2MP front-facing camera for video calls. Photos taken with the front facing camera are stored directly to Microsoft’s SkyDrive.

The company also says the new device differs from 85 percent of 10-inch tablets on the market in offering 4G LTE connectivity instead of being a WiFi-exclusive device.

As with its latest phablet offerings, Nokia recommends registering on its website to be notified when the new devices become available.