One Small Business Shows The Advantages of Offering Facility Tours 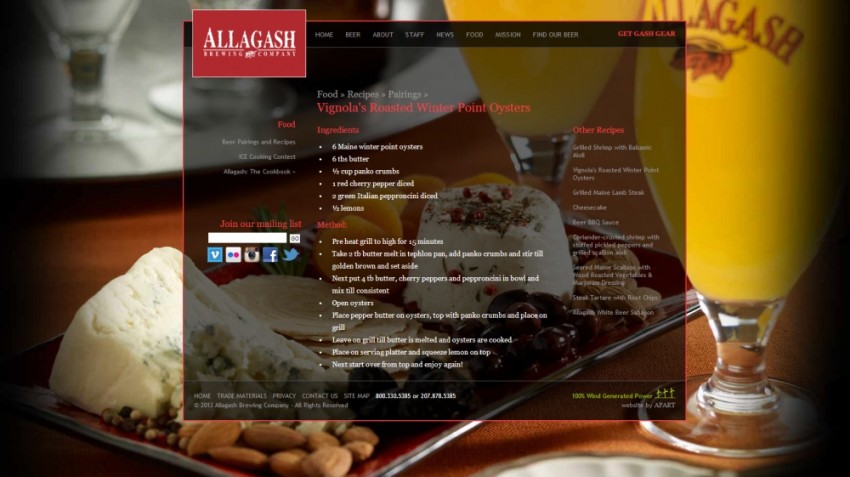 Allagash Brewing Company is a small craft brewery in Portland, Maine, employing around 65 people.   Faced with the challenge of marketing what is essentially a manufacturing business, the company started holding facility tours.

The facility tours took off and became a hit.  In the summer months brewery tours are often sold out.

But the facility tours raised another issue: how to overcome the noise involved in a tour.

“Breweries are loud places,” Jill Sacco, who is in charge of Allagash’s tour marketing, told us in an interview.  “At Allagash you are ‘right there,’ not up on a catwalk or behind glass.”  She said the brewery’s tour guides “had to scream” in order to be heard.  That, she adds, was stressful for the guides and for the visitors straining to hear.

That’s when Allagash tapped into technology for a solution.  First they considered (unsuccessfully) a loudspeaker microphone.  The microphone was still hard for visitors to hear, and it wasn’t good for employee satisfaction, either.  “If we were doing 8 or 9 tours a day, the guys working on the line had to listen to the tour 8 or 9 times a day,” she pointed out.

Then, Allagash hit on the solution of a wireless headset system. They tried one from Listen Technologies called the Portable RF System.  The tour guide wears a transmitter system, speaking into a microphone headset. The guide can speak in a normal tone without the need to shout.  The guide’s voice is transmitted wirelessly, and those on the tour with receiver earphones can adjust volume up or down, for a quality experience.

Initially, Sacco says, the Allagash team wasn’t sure that using such a system was the right decision.  “We were hesitant to try it at first,” she said.  The company wanted to maintain a personal touch, and they were concerned the sets would seem too corporate or too much like Disney World.

However, the result has been the opposite.  Using the portable tour guide system (see image below), visitors on the tour can hear even if they are in the back of the group. Tour guides are now more relaxed. Line workers don’t have to endure listening to the same tour over and over, day after day, Sacco says.  “We tried it and loved it.” 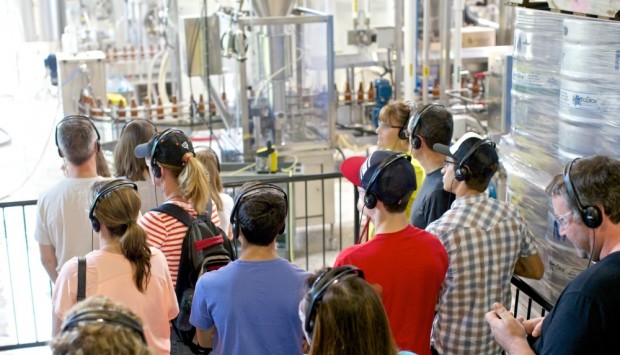 Facility Tours:  One Way to Grow a Manufacturing Business

Allagash was founded in 1995 as a one-man operation.  Founder Rob Tod had worked in a brewery, but thought there was a void in the craft brewing movement.  So he started with a small 15-barrel brewhouse, and began producing traditional Belgian style ales.   Along the way, people started spontaneously dropping by at the brewery wanting tours.  Gradually the company started getting more formalized for the tours.

Fast forward to today.  The company has been recognized for the quality of its brews.  It’s even been recognized by Trip Advisor as having the #2 brewery tour in the nation — beating out such nationally-known names as Samuel Adams and Anheuser Busch for facility tours.

In 2013, Allagash will have an estimated 22,000 people tour its facility — with sometimes eight or more tours each day in the summer. A typical tour has up to 25 people each. The company offers beer tastings to legal-age adults after the tours. And they also have a retail store where Allagash sells such branded items as T-shirts, glassware, bottle openers, hats, water bottles, frisbees and, of course, beer to take home.

According to Jill Sacco, holding facility tours makes sense as a marketing strategy.  Allagash doesn’t have a bar, pub or restaurant on site.  The tours, free tastings and retail store give people a reason to come to the brewery.

More importantly, facility tours reinforce the brand and give visitors something to remember the business by.   She says, “People leave with warm fuzzies — they have an emotional connection to the brand after being here.”

That leads to increased sales for the business, she notes.

It does, however, require an investment before it begins to pay off.  In the early years, running the tours and hosting the tastings were not self-sustaining activities. But this year, says Sacco, for the first time the tour operations will break even. Earnings from the retail store are now roughly covering the cost of staff (5 full-time people year round, more seasonally), and well as the tasting supplies and overhead allocation.  And that doesn’t even take into account the increase in sales that the company attributes to the tours.

But doing tours at that scale takes a good strategy, planning and execution. And it takes technology, also.  In addition to the Listen portable sound system, other technology that Allagash uses includes Eventbrite on the company’s website for tour reservations.

But the website with its integrated marketing goes beyond that, with pictures of fine food from fine restaurants (even though the company itself has no food operations).  There’s also a section for a food competition that Allagash Brewing holds each year at the Culinary Institute of Education, to “further the awareness of both pairing and cooking fine foods with beers.”  The website then features the recipes, such as BBQ Glazed Pork Chops using Allagash Interlude ale as one of the ingredients. The company even has its own cookbook.