A viral marketing campaign for the remake of the horror movie Carrie sent visitors at a Manhattan coffee shop scrambling for the door. Images below depict the event. But it was all in good fun. 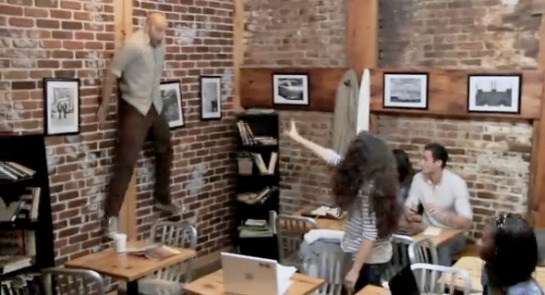 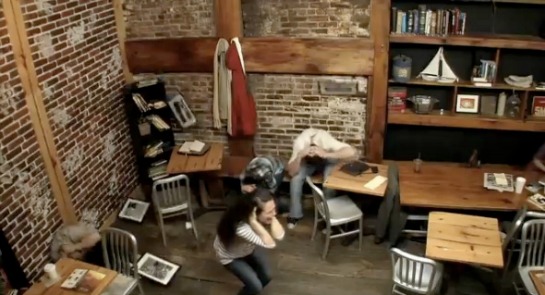 Unsuspecting customers at ‘Snice coffee shop were sitting at tables or lining up to make their purchases. Suddenly a couple of hired actors got into a rehearsed argument resulting in what appears to be a telekinetic fit.

The elaborate prank involved stuntmen, fake walls and furniture rigged with remote controls. You can view the prank in its entirety in the video above.

NYC based marketing firm Thinkmodo was the brains behind the spooky campaign. You might wonder what scaring coffee shop customers has to do with promoting a movie. But it definitely grabbed people’s attention. The video received more than 43,000,000 views on YouTube in two weeks.

And this isn’t the first time Thinkmodo has used unusual tactics to promote a project.

Thinkmodo applied a similar approach when promoting The Last Exorcism 2 inside a beauty shop in February for CBS Films. 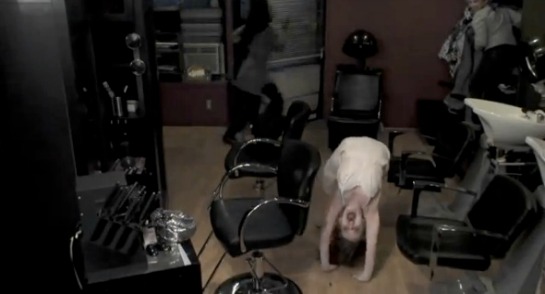 In July 2012, AMC enlisted Thinkmodo to bring attention to the fact that it was being dropped from Dish Network. So Thinkmodo dressed people up like zombies from AMC’s The Walking Dead series and had them run around New York City.

The prank resulted in a lot of New Yorkers running away screaming, but also more than 24,000,000 views on YouTube. 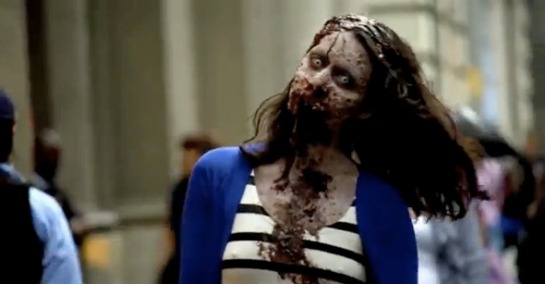 It’s not just the producers of scary movies and TV shows that have turned to Thinkmodo for creative viral campaigns.

Popcorn Indiana is a retailer of popcorn and other healthy snacks. But when the company had the idea to change the way people actually eat popcorn, they turned to Thinkmodo.

The company and ad agency thought up a device that launches popcorn directly at a person’s mouth when they say “pop.” Then they created a viral campaign for the product, dubbed The Popinator. 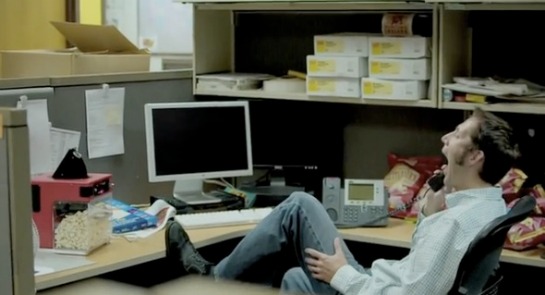 So how do these kinds of campaigns actually help a product or brand?

In the case of the Carrie prank, the video reached a wide audience and drew attention to the movie’s release. So the video not only promoted the movie to audiences who might have otherwise been unaware. It also created a sample of the kind of entertainment audiences might expect from the movie itself.

In all of the above cases, Thinkmodo utilizes a unique approach that surprises audiences and grabs their attention. If a little additional news coverage results, so much the better! Thinkmodo’s website boasts:

The NYC based company was founded in 2011 by James Percelay and Michael Krivicka, both writers and filmmakers who’s clients now include companies ranging from Sony Pictures to Cosmopolitan.

How is your marketing campaign grabbing customers’ attention?