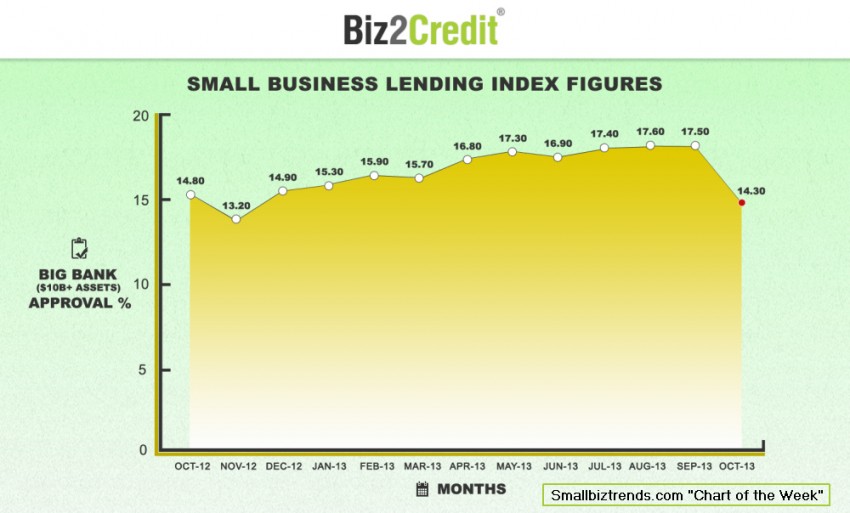 The U.S. government shutdown in October had a significant negative impact on small business lending, according to the Biz2Credit Small Business Lending Index. The Index is a monthly analysis of 1,000 loan applications.

Small business loan approval rates were down at traditional banks and credit union lenders.  Just how much they were down depends on the size and type of lender:

“SBA loan approvals stalled because the agency was closed for three weeks.  Similarly, non-SBA loans could not be processed during the government shutdown because the IRS was not operating.  Banks could not acquire income verification from the IRS during the shutdown, which is needed to approve many loan requests,” said Biz2Credit CEO Rohit Arora, who oversaw the research.

“A major backlog of SBA loans from the shutdown will take months to process, and the debt ceiling debate could negatively impact small business lending even further in the coming months,” added Arora, who is one of the nation’s top experts in small business finance.

“Small business owners desperate for capital during the shutdown turned to alternative lenders, who were willing and able to provide money, but at a much higher interest rate than a bank or credit union would charge,” explained Arora.  “The stop in the flow of capital came at a time of year when small businesses traditionally search for funding.  The economy, which is still in the weak recovery phase, simply cannot sustain this kind of disruption.”

In other words, it cost some small businesses more money, because of where they had to turn for capital instead.

Arora expects that small business loan approval rates and fundings will climb in November as the banking industry recovers from the shockwave of the government shutdown.

Biz2Credit analyzed loan requests ranging from $25,000 to $3 million from companies in business more than two years with an average credit score above 680.  Unlike other surveys, the results are based on primary data submitted by more than 1,000 small business owners who applied for funding on Biz2Credit’s online lending platform, which connects business borrowers with more than 1,200 lenders nationwide.

View the historic chart of the Biz2Credit Small Business Lending Index, for details.