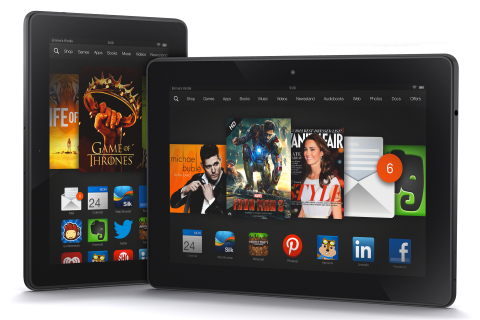 Apple may have begun the tablet revolution. But small business owners and entrepreneurs who favor the devices for staying on top of information while on the go now have more choices than ever.

The latest comes from an unlikely source – Amazon.

With the arrival of the Amazon Kindle Fire HDX 7 and 8.9 in stores, mobile entrepreneurs have access to tablets comparable to the iPad Air at competitive prices. The two devices were announced by Amazon together with a new version of the Kindle Fire HD 8.9 and new Kindle Fire HD 7 in September.

The key to the competitiveness of the Amazon tablets is certainly partially their new higher resolution. At 2,560 x 1,600 pixels, the 8.9-inch Kindle Fire HDX’s resolution is said by some to be better than the iPad Air, reports CNET.

The availability of 4G LTE, actual cellular connectivity rather than just WiFi connected to a network through a router, means they are more mobile than the Kindles that came before.

Certainly, the iPad continues to have advantages. For example, tech writer Anand Lal Shimpi reported recently on the Air’s ability to function as its own hotspot with a single charge for more than a day. But this probably goes well beyond the needs of the average mobile business owner.

Meanwhile, many company’s have begun to offer alternatives, including tablets with Windows and Android operating systems, at similar or competitive prices.

In the end, there are many cost effective solutions for budget conscious small business owners and entrepreneurs today seeking a tablet for business.