Why Many Small Business Owners Don’t Like the President 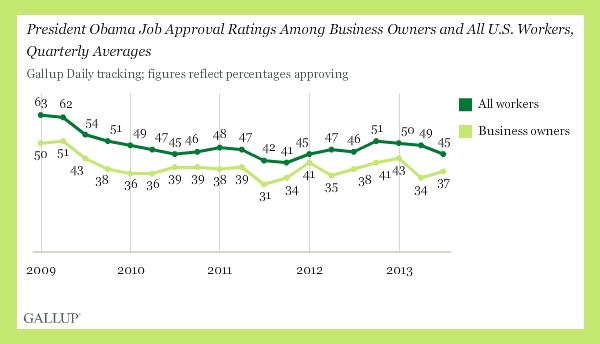 A Gallup Organization survey  indicates that only 37 percent of business owners approve of President Obama’s job performance – 8 percentage points lower than those of all employed Americans. The gap between business owners and the rest of American workers has remained statistically the same since 2009 (see Gallup poll chart above).

Why Is It That Small Business Owners Don’t Like the President?

Demographics are partially responsible. Business owners are older, whiter and more male than the rest of the population, Small Business Administration data show. And older White men tend to think the President is under performing.

Ideology also plays a role. Small business owners believe more strongly in the value of free enterprise, and think the government should have less involvement in the economy, than the rest of the electorate.

A third reason for small business owners’ disapproval of the President is that many of his policies hurt their businesses. Take the president’s healthcare law as an example.

A Gallup poll conducted this spring revealed that 48 percent of small-business owners think the law is going to adversely affect their businesses, while only 9% think it will help, and 39% think it will have no impact.

Finally, some small business owners fault the President for failing to anticipate the negative consequences of his policies for small business. Consider, for example, the Consumer Financial Protection Bureau (CFPB), a new agency established by the Dodd-Frank Wall Street Reform and Consumer Protection Act.

The CFPB has barred lenders from making qualified mortgage loans to borrowers whose debt is more than 43 percent of their income, and requires borrowers to prove they can repay their mortgage loans.

For small business owners who borrow against the equity in their homes to finance their businesses, this rule makes accessing credit tougher. Moreover, the focus of lenders on wage-based forms of income documentation makes providing they have the income to repay their loans harder for small company owners.

But since Mr. Obama isn’t running for office again, I doubt he is losing much sleep over his performance appraisal from small business owners.