Smooth Failing: Being Inspired by Others’ Spectacular Failures 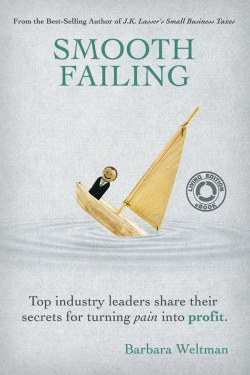 “Highly successful people make mistakes all the time.  Some failures are big, some even bigger, but none need result in the end of your dreams to succeed.”

So writes Barbara Weltman in her latest book, “Smooth Failing: Top industry leaders share their secrets for turning Pain into Profit.”   Weltman — an attorney, tax expert, small business expert and author — is well-known as the author of the J.K. Lasser’s Small Business Taxes books and guides.  She’s also the author of several “how to” books on small business topics, including The Idiot’s Guide to Starting a Home Based Business.

Smooth Failing is a departure from that type of book.  Weltman (@BarbaraWeltman on Twitter) tackles a subject that most of us who are entrepreneurs have lived through:  failure and how to get past it.

Smooth Failing is a book of  case studies and lessons.  It covers the failures of successful entrepreneurs – and some of the failures are so over the top that they could have been ripped right from the pages of a thriller novel.   Yet they are real.

This book has it all!

In interviews with 10 successful business owners and entrepreneurs, Weltman manages to wheedle out stunning admissions of failure, such as as lying to a client. Yes, that’s one of the stories.  It comes from New York Times contributor Gene Marks who told the story of how he lied to cover up some shoddy performance of his company’s proprietary software.  He regretted lying and eventually the software became obsolete.  That happened years ago.  The lying made him physically sick, and he learned an important lesson that changed the way he did business.

And then there’s the story of the FBI showing up at one entrepreneur’s doorstep.  John Jantsch of Duct Tape Marketing was stunned.  One of his then-clients was accused of money laundering.  Jantsch, of course, never had a clue about what his client was doing.  However, he had to spend time preparing for and testifying in front of a grand jury that ended up indicting the client. Jantsch himself was promptly cleared.  But that experience helped propel him to radically change his business focus.

Or what about the entrepreneur who, desperate to get his new business off the ground, offered a sales rep the ability to earn 50% equity in the company in exchange for meeting certain sales targets.  The sales rep was hell bent on meeting those targets — so much so that he nearly drove the business into the ground.  That’s the story told by Tim Berry, founder of Palo Alto Software.

And imagine being Peter Justen, formerly the CEO of MyBizHomepage, and now the CEO of business dashboard product Five Plus.  When he learned his Chief Technology Officer was planning to start a competing business,  Justen terminated him.  However, his former employee had planted “logic bombs” in the company’s software product.  Logic bombs are pieces of code that launch on certain activities, and delete code or data, or make it unusable. In short, the former executive — someone Justen had thought was a friend — sabotaged the product.  Justen literally had to start over, and build a new product from scratch.  But that was only the beginning.  The former executive launched a defamation attack against Justen and his family, hacked into their email and social accounts, and attempted to blackmail Justen.  It turns out that the executive lived off the grid and managed to hide his tracks in order not to be found by authorities.  Phew!

After stories like those, my own story — which is also included in the book — sounds positively boring.  My story is about having too many irons in the fire. I drifted along and lost focus on my goals.  Once I got my goal mojo back, and brought in some help, the business leapt forward.  In my case the CTO was the hero, not the villain. Yeah, I know … not nearly as exciting as grand juries and logic bombs.

What I liked best about this book is the way Weltman manages to distill each case study down into a few lessons.  That is harder than it sounds, and I’ll tell you why.  I can remember back almost a year ago when the author contacted me. We arranged a lengthy phone interview about my experiences.  In the book everything is laid out cogently.  The lessons are succinctly summarized.

You might get the impression that I was super articulate that day, and delivered everything on a silver platter to Barbara Weltman.  Nope.  I rambled.  I just started talking without necessarily identifying my own lessons or even what I was going to talk about.  The story took shape and the lessons emerged only after probing questions from the author.  That’s what a skillful interviewer can do.

The book is published by Indigo River Publishing. On its website it describes itself as a “modern and progressive publishing house and we believe in a more dynamic and entrepreneurial approach to the building and marketing of our books.”

The book is published in two editions.  One is a standard edition containing only the 10 lessons currently in there now.

But here’s the innovative part:  the other editions is called a “Living Edition.”  This means that additional case studies and lessons will be added.  And entrepreneurs can request to be considered to be included in the book.  Those why buy the Living Edition (which is electronic) will have access to the additional entrepreneurs added later.

Why Get This Book

(1) The stories are enthralling and not just about business, but about life and human nature.

(2) You may know one or more of the entrepreneurs profiled.  Many of them are active online and in social media.  I don’t know about you, but often it’s hard for me to relate to the one-in-a-billion success of someone like Mark Zuckerberg, founder of Facebook.  I find little that is relevant to apply to my own business, because the scale is so different.  But I can relate to the experiences of a John Jantsch of Duct Tape Marketing or a Norm Brodsky.

(3) It is useful. The lessons are encapsulated at the end of each chapter.

(4) But the best reason to read Smooth Failing, in my opinion, is that ultimately the book is  positive and uplifting about not giving up. You must adapt and reboot your business.  When you are feeling like nothing is going right — and you will feel that way at some point in your entrepreneurial journey — it may be the motivational shot in the arm you need.