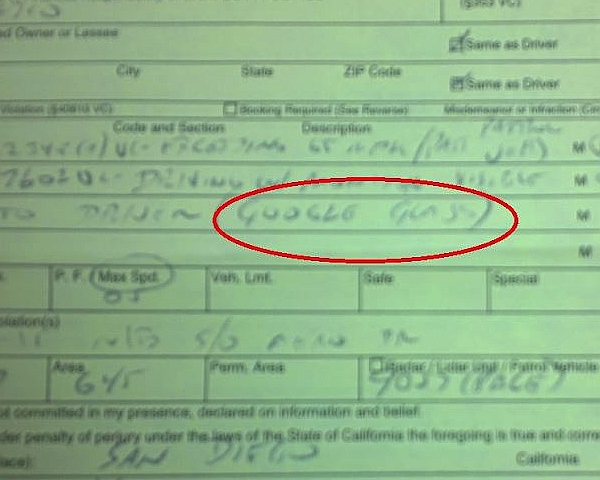 Before you decide to wear Google Glass to hold a conference call or check your email while speeding down the highway, think again. That’s especially true if you happen to live in Southern California.

Cecilia Abadie says she wasn’t even using the device when police pulled her over for allegedly going 80 mph in a 65 mph zone near San Diego.

Yet — besides the speeding, of course — Abadie says the citation clearly mentioned Google Glass. She was wearing the light weight frames containing the tiny computer interface while behind the wheel. However, she says it wasn’t even on at the time.

As might be expected, Abadie took to Google Plus immediately after being stopped. She wrote:

“A cop just stopped me and gave me a ticket for wearing Google Glass while driving! The exact line says: Driving with Monitor visible to Driver (Google Glass). Is #GoogleGlass [illegal] while driving or is this cop wrong??? Any legal advice is appreciated!! This happened in California. Do you know any other #GlassExplorers that got a similar ticket anywhere in the US?”

Abadie told the Associated Press she would probably fight the ticket. (She’s talking, presumably, about the part that doesn’t deal with her allegedly driving 15 miles above the posted speed limit.)

So think carefully before donning your favorite wearable technology and climbing into the driver’s seat. Your friendly neighborhood law enforcement authorities may not take kindly to it.