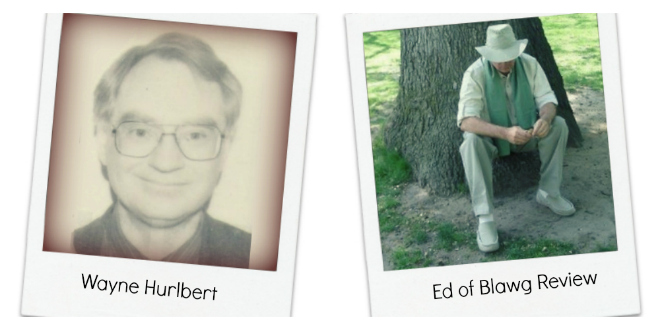 Recently two bloggers I know passed away.  I never met either of them in real life.  The only dealings I had with them were online.  I guess today, in a world of Facebook and Twitter, communicating with someone long distance and online for years qualifies you to be their “friend”  — or at least an online friend.

This article is part eulogy for the two people I knew.  And it is part an examination of how we honor and remember our online friends when they die, in the age of blogs and social media.

It’s surprising how well you can get to know people solely through interactions online.  You learn about their character by whether they follow through on commitments, and by the small things they do for people without expecting anything in return.  Little bits of personality come through in everything a person writes.   If you eventually meet your online friends in real life, it adds another dimension to the relationships.

And what happens when a blogger dies — then how do we honor our online friend?  Let’s take a look at two situations I have encountered in just the past three weeks.

Wayne was one of the kindest people you will ever encounter.  He was among the first “business bloggers” I met, back in 2004 when business blogging was a new and unique thing.  He started his site around the same time that I started Small Business Trends – more than 10 years ago.

I met him through online events that bloggers organized, called blog carnivals. Blog carnivals are roundups of interesting blog posts from across the Web on a certain topic.

Wayne was a man of many interests.  I remember him telling me once that he grew up on a farm in Manitoba, Canada.  In the age of the Web, he was able to start and run a search marketing business from his home.

He was quite a communicator with varied interests.  Along with his business blog, Wayne also authored a comedy blog and a roller derby blog.  He had been involved in the roller derby business. He also was one of the first hosts on the then-new BlogTalkRadio network.  For seven years he ran a talk radio show, right up until he passed on.  In later years, he reviewed business books on his site and on his radio show.

Wayne was all about being real.  He was straight forward in his dealings.  You always knew where he stood — there were no ulterior motives going on under the surface.  He was skilled in marketing, but he wasn’t about self-promotion. Very self-effacing and modest, was Wayne. One of the common threads through all the online comments about Wayne was how modest and kind he was.

My big regret with Wayne is that I fell out of touch, and never had the chance to circle back with him before he passed on.  I thought of him out of the blue a few days before he died.  Don’t ask me why — he just popped into my mind one day as I was out cycling.  Maybe it was pure coincidence — or maybe it was a premonition (if you believe in those things).  I made a mental note to touch base with him. Regrettably, I waited too long.  The next thing I knew Paul Chaney, another online friend, had sent around an email announcing the sad news of Wayne’s untimely death.

Lesson learned: don’t wait to reach out to someone — whether an “online friend,” a lonely shut-in, a neighbor in need, a true friend, or a loved one.  Unexpected things happen. They — or you — may not have much time left.

What the Online Community of Friends Did Next

When there’s a death, a family member usually steps up and tells the online community.

And that’s what happened here.  Wayne’s sister let people know on Facebook.  It doesn’t take much – soon the word spreads.  Later we learned that Wayne died of a massive heart attack, and was found slumped over his computer.

The online community stepped in to honor Wayne.  I saw a dozen or more blog posts in remembrance, and many more comments. There were literally hundreds of remembrances via social media. Alan Levy, the Founder of BlogTalkRadio.com did a tribute show, including Toby Bloomberg, a good online friend of Wayne’s, who also wrote a tribute, and Blog Bloke, who also wrote a tribute. Paul Chaney shared information about a memorial fund on Facebook.

There was at least one Twitter chat that honored Wayne using his name as a hashtag for that event.  It turns out that Wayne often participated in chats.

Wayne’s Blog Business World website is hosted on the free Blogger platform. I am hopeful that it will remain online indefinitely as a memorial to Wayne’s memory.

“Ed” — short for Editor — was the long-time anonymous Editor of Blawg Review.  I didn’t know Ed as well as I knew Wayne — my dealings were fewer and more sporadic.  But I had just as much respect for Ed.

Rare are people who dedicate as much time and effort to the online community as Ed.  In his case, it was the community of lawyers, judges and law professors — the writers of law blogs, also known as blawgs.

Ed created a site and weekly event called Blawg Review.  Blawg Review was a carnival of law-related blog posts for the week.

Mark Bennett, a lawyer who blogs at Defending People, summarizes what Ed did and what happened next:

“From April 11, 2005 (Evan Schaeffer’s Blawg Review #1) to July 2, 2012 (Paul Kennedy’s Blawg Review #324) “Ed.,” the anony­mous edi­tor of Blawg Review, mid­wifed into exis­tence a weekly (for the first six years, inter­mit­tent after that) “blog car­ni­val,” in which one law blog­ger or another, host­ing on his or her blog, gath­ered inter­est­ing law blog posts from the pre­vi­ous week and con­nected them together in a post with a theme of the blogger’s choice.

The blaw­gos­phere learned this week that Ed had died of esophageal cancer.”

Ed’s son announced it on the BlawgReview Twitter feed, in a series of 140 character tweets about his father.  I’ve strung all the tweeted messages together so you can read the entire thing:

“Dear Blawg Review Community, I am the son of Ed, writing today with a heavy heart, to inform you of his passing after a courageous battle with esophageal cancer. I believe it would have been his wish for Ed to remain anonymous – and so I will respect those wishes. I would like to thank each of you for bringing joy to Ed’s life as part of this online community. There was nothing my father enjoyed more than debating the philosophies, merits, and impacts of laws around the world – sharing opinions… and celebrating the discourse you helped create here at Blawg Review.

One of the lawyer-authors even linked to every one of the 324 Blawg Review Editions. That way, if the BlawgReview.com site went away, a record would be preserved for posterity.

I’ll forever be grateful to Ed for including Small Business Trends to host several Blawg Reviews.  It was a leap of faith for Ed to choose us, because it was a bit of a stretch, topic-wise.

While I used to practice law back in the day, this site is and always has been about business.  Even when I practiced law, business was top of mind. I spent most of my career as a corporate attorney in-house.  These days I run an online publishing company where I can be a business news junkie to my heart’s content.

But I loved and still love reading blawgs to discover new legal developments.  I find many law bloggers to be erudite and articulate. Most have incisive minds.  Many are courageous and fearlessly spread the word of what they believe in — whether it is the constitution or intellectual property law.  Hosting and reading blawg reviews became a fascinating pastime.

To most of us, Ed was anonymous.  He was always just Ed.  Yet his identity became a small (OK, tiny) cause celebre online.  Matt Homann of the [Non]Billable Hour speculated on his identity, with several denials following.  Kevin O’Keefe, the founder of LexBlog, at one point years ago wrote several articles wondering why the secrecy.

Some who questioned Ed’s anonymity got past their initial concerns about his motives, but some never did.  I think Ed’s motive for anonymity was simply that he didn’t want to grab the limelight.

Regardless of who he was, the online community took the time to remember Ed.  Dozens of remembrances can be found via this Twitter search for BlawgReview.

Our condolences to the family and close friends of Wayne and Ed, who may run across this article.  In ways you may never realize, your loved ones touched our lives and changed us for the better.

Wayne and Ed — we miss you.