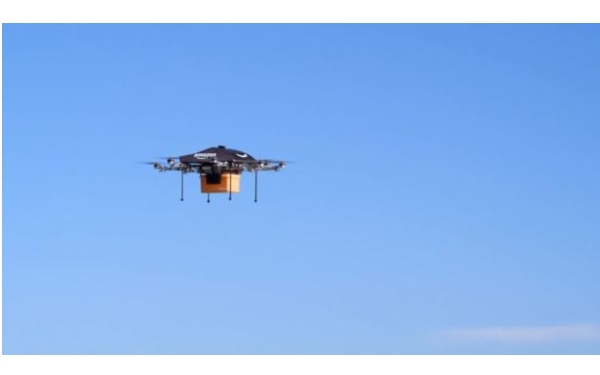 It looks like something out of a science fiction movie. But Amazon CEO Jeff Bezos seemed quite serious when he told 60 Minutes recently the company is working on the idea of air delivering packages by drone.

The initiative is being called Amazon Air and would involve delivery by flying robotic vehicles to customers within 10 miles of an Amazon warehouse. The time from placement of an order to delivery by the drone in these areas might be just 30 minutes, Bezos speculates.

Amazon recently released a video to better demonstrate how the drone delivery system might work:

Realistically, however, implementation could take three to five years, and that’s just to get FAA approval. There may be other problems, too, in densely populated cities like Washington D.C. where no-fly zones are currently in place.

The technology has moved forward faster than the law has kept pace.

But the real impact will be on carriers like UPS and FedEx. These are the companies with the most to lose in the short-term as a result of Amazon’s current plan, reports Chris Ciaccia of The Street.

On 60 minutes, Bezos speculated the devices could handle about 85 percent of the packages Amazon delivers.

Those are packages that potentially would have been sent by the two ground carriers otherwise. But the new system would allow Amazon to speed up delivery and significantly cut costs.

The plan could also be bad news for small businesses seeking to compete with Amazon in the online selling arena. It means most of these businesses will be unable to match Amazon’s delivery time or low costs because they are still forced to ship through more traditional carriers.

Shawn Hessinger is the Executive Editor for Small Business Trends and a professional journalist with more than 20 years experience in traditional and digital media for trade publications and news sites. He is a member of the Society of Professional Journalists and has served as a beat reporter, columnist, editorial writer, bureau chief and managing editor for the Berks Mont Newspapers.
13 Reactions
Subscribe
Follow @smallbiztrends
RSS LinkedIn Pinterest iTunes