Dell: More Than a Hardware Company 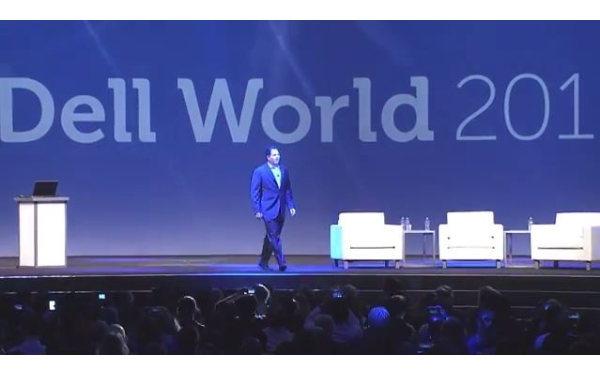 “As a private company, we can take a longer term view of innovation,” said Michael Dell, CEO of the newly private Dell, at the opening keynote of Dell World 2013 in Austin yesterday.

Innovation was the theme underlying the first day of Dell World, where I am this week.  Dell is a company with a renewed mission now that it has left the stock market and gone private again.

Dell has over 100,000 employees and before it went private at the end of October, was a Fortune 500 company.  So clearly it is no longer a startup.  Michael Dell’s reference to startup has to do with the company’s commitment to getting back in touch with its entrepreneurial roots.  (Michael Dell started the company from his dorm room in 1984.) It also has to do with building on the kind of innovative culture that led to 80% year-over-year growth in its early years.

Dell’s growth stalled over the past year as sales of PC computers remained flat or declined.  The problem hasn’t been unique to Dell. Most computer manufacturers seem to be in the same boat, as more people turn to mobile devices such as smartphones and tablets.  PC sales are down worldwide.

So Dell has had to pivot and step out in new directions.

For instance, did you know that Dell now has a growing software business?  It also offers storage, security and services.

Dell completed a series of acquisitions last year to jump start its launch into the software side of the business, which it sees as growth territory. In fact, in its last public earnings release in August 2013, it stated that its Enterprise Solutions, Software and Services revenue was up 9% even though revenues overall were flat.

Two overriding takeaway messages stood out after the first day of this event and listening to executives, including CEO Michael Dell:

1. Dell Has The Freedom to Be Innovative

Now that Dell has gone private, it has the freedom to be innovative, take risks, and invest in new products and services.

No longer under the pressure of meeting Wall Street demands and quarterly earnings goals, the company is investing in innovation.

Dell announced that it has created a $300 million Innovation Venture Fund. The Fund is under the wing of Dell Ventures and Jim Lussier, Managing Director of Dell Ventures.  Via the fund, Dell is identifying innovative technology companies from outside, and investing in them.

Dell also has the Dell Center for Entrepreneurs. This Center launched last year under the direction of Ingrid Vanderveldt, who also serves as Entrepreneur in Residence at Dell. The Center provides mentoring, assistance and access to a $115 million debt financing fund, to fast growth companies.

Another form of innovation is organic, through internal research and development.

2. Dell is Not Limited to Hardware

Dell’s goal is no longer to be viewed as providing computer hardware.

It is positioning itself to be a “one stop shop” for all a business’s IT needs. That positioning is for all businesses, no matter what size your company, one executive told me.  In addition to its own fledgling software business, the company is a reseller of or has partnerships with a wide variety of software and solutions. Those include Microsoft and Google — and even offers mobile solutions.

For the most part, Dell’s software and solutions target mid-market and large corporations.  Although Dell has 10 million small business customers worldwide, right now the focus seems to be on serving larger entities on the one side. Dell also focuses on startups that can inject innovative technologies and solutions, on the other side.

There wasn’t much news as it relates to established small businesses outside of the “high growth startup” category. Sure, Dell has plenty of tablets and computers you can buy for a small business. In that respect serves us all well. But in terms of innovative small-business offerings not much beyond that — or, at least, not announced at Dell World.

Dell invited me to the event and flew me down here. The vast majority of the time here at Small Business Trends we turn down invitations to vendor conferences. But I’ve had a sense of some of the entrepreneurial commitment at Dell and wanted to see first hand if it was real or just talk. Some companies are good at the talk, but fail when it comes to the walk.

It seems that Dell as a company, and Michael Dell himself, are sincerely committed to their new mission to innovate and pivot to offer more software and services — not just hardware.  Michael Dell was very visible and approachable throughout Dell World (unlike many CEOs who disappear after the keynote).  In other words, Dell seems to be walking as well as talking.

The big question is: at what point will Dell turn more of its innovation attention to the small business market of under 100 employees?