Ohio Grocery Bakeries Battle It Out Over … Killer Brownies 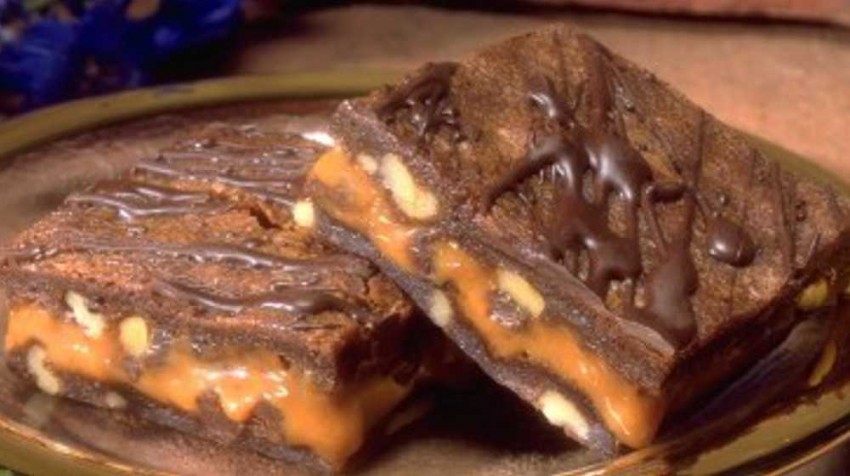 Well, it wasn’t much of a battle really.

In fact, as it turned out, the whole thing was handled quite amicably.

And that’s what impressed us about this story.  It’s about business owners getting together and resolving an issue quickly and professionally – before it got out of hand.

So let us tell you the story of how three independent grocery store chains settled a dispute over a beloved confection — “Killer Brownies.”

Killer Brownies, pictured above, are a gooey confection that includes caramel and nuts in the brownies.

The story starts years ago.  Rick Vernon and Larry Uhl, co-owners of West Point Market in Akron, Ohio, had been selling the succulent treats exclusively in Northeast Ohio for years.

Baked fresh in their upscale grocery’s bakery, the brownies were made from a special recipe passed down by Vernon’s dad Russ. He’s the former owner of the market and is now in retirement.

The elder Vernon had actually gotten the recipe from yet another independent grocery store owner, Larry Ehlers of Larry’s Market in Brown Deer, Wisconsin.  Ehlers, who reportedly had adapted the recipe from a Betty Crocker cake mix box, was a friend of Vernon’s and gave permission to use the recipe.  (At this point Larry’s Market steps out of the picture.)

Back in Northeast Ohio, Killer Brownies became associated with the West Point Market over the years — so much so that the market’s loyalty program is actually called “Brownie Points.”

Because of the iconic brownies’ close connection with their store, the owners of West Point were surprised when a competitor, Bueh­ler’s Fresh Foods stores, started selling the same brownies — under the same name — in local stores.  Buehler’s, which is based closer to central Ohio, also has stores in Northeast Ohio within local shopping distance of West Point Market.

How did this dispute happen? Well, it wasn’t a matter of corporate espionage like you hear about in the big business world.

In fact, it just boiled down to a simple misunderstanding — and a licensing arrangement that included exclusive geographical rights.

You see, years ago Russ Vernon of West Point Market had provided the rights to the recipe to his friends, the Mayne family, with the understanding that they NOT market them in Northeast Ohio. The Maynes own and operate the Dorothy Lane Markets of Dayton, which is about 200 miles away in southwestern Ohio.

Are you still with me?   Let me recap the geography for you.  The recipe started on the back of a cake mix box.  It was adapted in Wisconsin by one grocery store owner.  Then it was shared to another in Akron, Ohio.  From there the recipe made its way to Dayton in southwestern Ohio — all except for the rights to market the brownies in Northeast Ohio, those being retained by the Akron store.

Now that you have the geography down, let’s get back to our story.

Down in Dayton, the Maynes got a bright idea. Why not license the brownies nationally and potentially serve an even larger customer base?

And that’s how Killer Brownies eventually made their way back up through central Ohio to some stores in Northeast Ohio.

Unfortunately, through an oversight, Dorothy Lane Markets entered into a licensing arrangement with Buehler’s without realizing that some of its stores were also located in an area competitive to West Point Market.  That meant that Killer Brownies were now being sold competitively against West Point Market, in its exclusive Northeast Ohio territory.

Norman Mayne, CEO of Dorothy Lane Markets, told the Akron Beacon Journal, “We made a terrible, terrible mistake and it’s 100 percent my fault.”

While the resulting mess-up might have resulted in an ugly legal battle if unreasonable minds had been involved, it was settled simply enough by these small and midsize business owners.

Buehler’s has been cooperative about it, despite the effort and expense of licensing and marketing the brownies for a short time.  “It was an honest mistake. Because of that, we will not be selling the Killer Brownies,” Bob Buehler told the Akron Beacon Journal.  Buehler’s Fresh Foods decided to pull the product from their stores, website and Facebook page. But they are considering perhaps altering the recipe and offering the brownies later under a different name.

However, dispute solved — all before Christmas.  One business lesson remains:  geographic licensing rights can be a tricky thing.

This Recipe’s a Killer

Finally, if you won’t be in Dayton or Akron any time soon, here’s the recipe for Killer Brownies for you to try at home:

This is the West Point Market recipe as published in the Akron Beacon Journal.  You can get the mixing and baking instructions here. (We won’t give you the calorie count as it would probably spoil your enjoyment.)