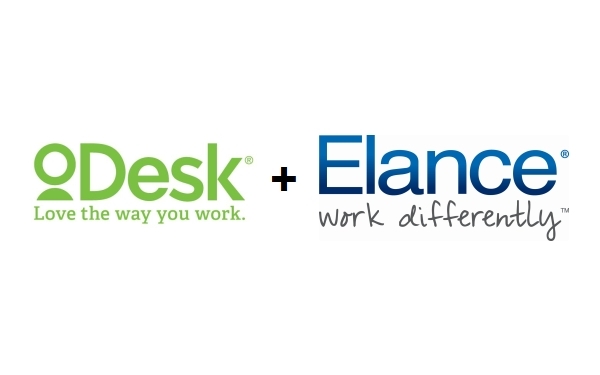 Yes, it’s big news in the freelancer world.  oDesk and Elance today announced that they are merging.  The two giants of online freelancing marketplaces have both signed a definitive agreement to merge.  The deal is expected to close within four months, and is subject to regulatory approval.

Together they say they will have 8 million freelancers and 2 million businesses in over 180 countries.

According to a prepared statement issued jointly by the companies today, the merger brings strategic benefits. These include a greater combined investment in technology and the ability to accelerate growth and scale as a result of combining forces.

oDesk had flirted with the idea of going public several years back, AllThingsD reports. But the company has apparently decided against that for now.

Today oDesk chief executive officer Gary Swart notes in the release, “oDesk is thrilled to join with Elance in order to innovate faster.”

The companies have a big vision — as in Amazon and Apple big.

“Just as Amazon reinvented retail, and Apple iTunes transformed the music industry, we will greatly improve how businesses hire and people work online. This merger will  … allow businesses of all sizes to more easily access the best available talent,” said Fabio Rosati, the CEO of Elance.

The two companies will continue to run separate platforms at odesk.com and elance.com. Today there are differences in how the two sites operate. For instance, oDesk charges 10% and Elance charges 8.75%.  Reactions to the news on the oDesk blog can be seen here, and reactions on the Elance blog can be seen here.

The name of the new company post-merger will be announced after the deal closes.

Editor’s update: the above article was corrected to reflect accurate information about fees.