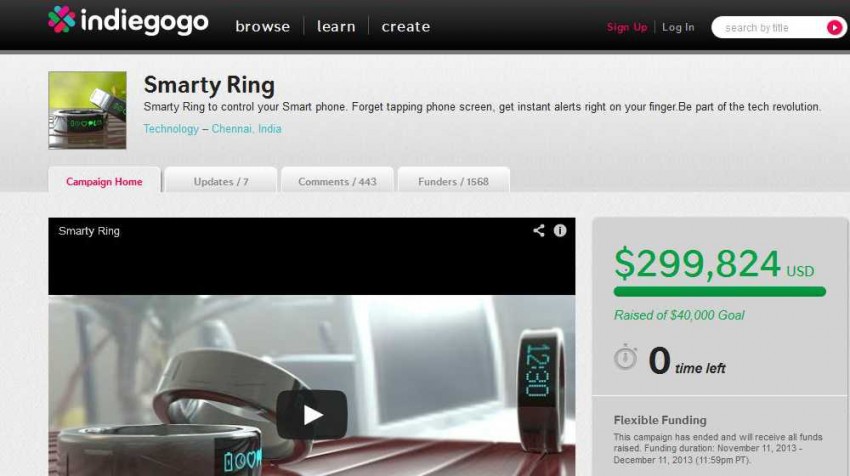 It may look like something out of a fantasy story about magic rings and wizards. But the makers of the new “Smarty Ring” seem quite serious.

In fact, they have already raised $299,824 in crowdfunding via Indigogo (well above a more modest $40,000 goal) to make the product a reality.

It’s the latest in a series of wearable technology including Google Glass and smartwatches. The device is meant essentially as a way to manage your smartphone or other mobile device.

Developers say users will be able to receive call, text, email and chat notifications, all without ever touching their smartphones.

You would also be able to accept or reject incoming calls: Something pretty important during a business meeting!

There’s a speed dial function, which would presumably start dialing a programmed number before you’ve even fished your phone out of your pocket or purse. And you would also get social media updates too, developers claim.

Check out a brief overview video with more of the features mentioned.

Again, the device is clearly in many ways an accessory for your smartphone similar to a smartwatch (though even smaller and theoretically even less intrusive, of course.)

Developers say it will solve the problem of people supposedly checking their smartphone up to 150 times per day, a statistic quoted in promotional information.

To the degree this is true (or not) for you, especially in your daily business life, you could use the ring as a way to keep updated without needing to constantly glance at a mobile device.

The Smarty Ring will be available for both Android and Apple devices (including both the iPhone and iPad) at a retail cost of $275. However, no specific date for availability has been announced.

Contributors of $175 or more in the recently closed Indiegogo crowdfunding campaign will receive their devices by April 2014, according to developers.

The device is waterproof stainless steel with LED display. And a battery charger for both ring and accompanying smartphone will also be available.