The Solution Revolution: How Organizations Are Solving Society’s Problems

A book that will shed light as to how to best approach concepts that can spur unique aspects of your business model and to broaden your view of the economy. 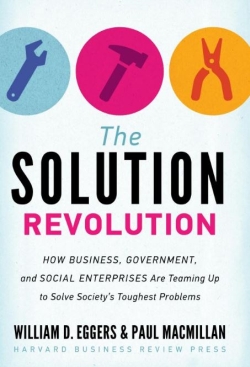 The recent U.S. government shutdown may have caught headlines, but for a real look at government-private enterprise trends, look at how large cities like Chicago and New York are courting developers and start ups to access public data APIs to build applications to serve citizens better.

For example, I attended a Social Media Week Chicago panel that talked about an app meant to help better locate cars towed by the city.

William D. Eggers (@wdeggers) and Paul MacMillan, authors of The Solution Revolution: How Business, Government, and Social Enterprises Are Teaming Up to Solve Society’s Toughest Problems, has a phrase for this kind of tech environment – The Solution Economy.  The book illuminates where government, business and organization are working together to build services that truly better society.

Eggers is an authority on government reform while MacMillan is a public sector management consultant and strategic advisor based in Canada.  I learned about The Solution Revolution from Harvard Business Review and asked for a review copy.

My experience at Social Media Week Chicago offered a small glimpse into the current global trends Eggers and MacMillian reveal among enterprises.  Budgets are strained, as Water Isaascson, author of Steve Jobs notes in the praise comments for The Solution Revolution:

But with the need to spur economies forward despite budgetary concern,  governments all over are investing in technological initiatives with private enterprises that hold the best promise in:

“We’re still learning how government, business, investors and philanthropists can best create and expand flourishing markets in the solution economy. In India, the government has created a $1 billion “inclusive innovation fund” to spur private-sector solutions to some of the country’s knottiest problems. Meanwhile, the Cameron government in the United Kingdom launched a £600 million fund in 2012 to help fund new societal problem solvers. . .Across the Atlantic, the Obama administration introduced a bevy of initiatives to support a growing solution sector, including a $50 million social innovation fund and a new Office of Social Innovation.“

The solution economy, asserts Eggers and McMillian, is defined by 6 principle features: 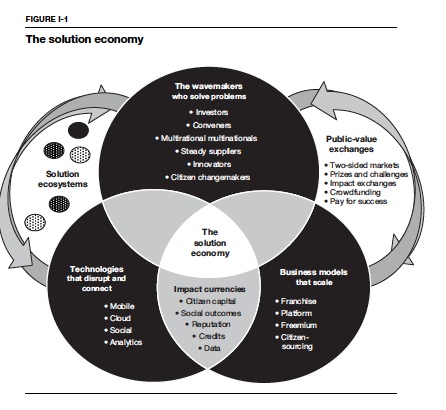 According to Eggers and MacMillan, it’s not enough to have one or even each of the six. They note the environment in which the principles unleash economic value:

“…the real breakthroughs come from deftly weaving the elements together – doing so can make even the thorniest problems solvable.”

Eggers and MacMillan hold the Gates Foundation as a Wavemaker example, noting how its substantial $37 billion endowment emboldens it to address large global concerns in a way that dwarfs the ambitions of well-known institutions such as the Ford and Rockefeller Foundations.

From examples like the Gates foundation, the authors do well in explaining the scope of the principles.  Others are eye opening, such as Recyclebank, an organization that uses a form of gamification.  It give households points for prizes in return for their recycling operation, using RFID chips on recycle bins to credit households based on weight.

“As I started looking at the recycling industry, I saw massive inefficiencies. Cities were sending tons of garbage far away and paying for transportation to landfills that were very expensive, costing taxpayers hundreds of millions of dollars. Anywhere there is such inefficiency, there is an opportunity.”

Other chapters teach the impact on world economies and are a good read on social issues. An eye-raising chapter include the topic of human trafficking. Many human trafficking schemes lure workers with the promise of honest jobs. Instead, workers are isolated from their families and friends, trapped in modern-day slavery from mining workers to nightwalkers.

A Brazilian worker highlighted his conditions such as drinking the same muddy water as the cattle he worked with.  Agencies that fight these conditions are not well coordinated, though corporations are combating the issue through vetting their supplier base.  Eggers and MacMillan note the importance of cooperative partnerships among other influences to better coordinate how social solution are deployed across governments:

“Government’s willingness to forge partnerships (and vet those partners with accurate metrics), to make data more open, to contract for outcomes, to reduce regulatory minefields, and to convene diverse groups of contributors will hold tremendous sway over the scale of the solution economy within its borders.”

I liked that the authors highlight societal concerns without reducing all aspects to just the number and facts.

To me, The Solution Revolution’s global economic viewpoint offers a broader view than Anna Bernasek’s book The Economics of Integrity. But its purpose is meant for a different purpose. While Bernasek focuses on the correlation of branding and trust from a macroeconomic perspective, The Solution Revolution is meant to show how that perspective is enacted through the coalitions and enterprises being formed.

The Solution Revolution will instead shed light as to how to best approach concepts that can spur unique aspects of your business model like Recyclebank.  This is especially valuable as technology widens its influence beyond a laptop and into other devices.

Get this book to broaden your view of the economy, and as a result, start a revolution in your field.

Pierre Debois is Associate Book Editor for Small Business Trends. He is the Founder of Zimana, a consultancy providing strategic analysis to small and medium sized businesses that rely on web analytics data. A Gary, Indiana native, Pierre is currently based in Brooklyn. He blogs about marketing, finance, social media, and analytics at Zimana blog.
6 Reactions
Subscribe
Follow @smallbiztrends
RSS LinkedIn Pinterest iTunes