Why Employees Are Always A Bad Idea: A Review 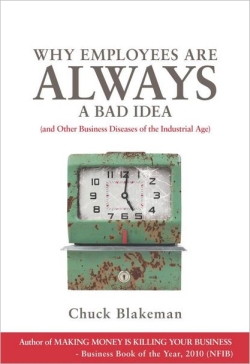 You have to love business authors who look for a new twist on ideas, especially when they encapsulate that twist in a book title. Chuck Blakeman (@ChuckBlakeman) succeeds with a “Big E” for that encapsulate.

Just check out Blakeman’s in-depth book, Why Employees Are Always A Bad Idea (and Other Business Diseases of the Industrial Age).  The title was the reason the book caught my attention via Twitter.  I like books that find ways to ignite our imaginations, and Blakeman certainly makes a solid attempt in envisioning fulfilling work.

Blakeman wrote the book Making Money Is Killing Your Business, and is CEO of the Crankset Group.

What Ails Big Business … and Small

The book’s title is the third of 7 “core business diseases” – archaic practices that are a cumulative result from society’s overemphasis on technology.  Employees are thus “silent” in their workplaces. They bring their productivity but creative thinking skills are limited (BTW, there is a chapter on why managers are a bad idea, too.)

This message may sound like a new-age rant on the surface, but Blakeman’s approach helps the reader think critically about what workplace they want to be in.  It can also inspire small business owners to be mindful on what culture they want to establish, as small companies now have a capacity to operate like a corporation in many ways.

Blakeman advocates how the Factory System in the Industrial Age replaced craft in small spaces, along with a perception of what meaningful work was suppose to be:

“The 120-year dominance of the Factory System (1850-1970) replaced hand manufacturing in homes and workshops with machine-based production. For the first time in history, this required people to regularly leave their homes and go to work at a centralized factory location to perform work …. By the 1880s, industrial production exceeded what the economy could absorb. For the first time in history, this degraded the value of an individual’s work.”

Blakeman juxtaposes historical perspective and an entrepreneurial experience in Africa with many of the themes played out in today’s world. It’s about the quest to build value in how we work.  In the following quote, for example, Blakeman notes the irony of what large corporations have done. Not so much a criticism on big business as much as how we have adjusted our life expectations as a result:

“The biggest impact of the Industrial Age was a Jekyll-and-Hyde experience – raising our standard of living, while methodically stripping us of many of the things that make us human…At our core, we are not made to be extensions of machines, or to find our personal validity in four decades of gutting it out just so we can sit on a beach for a few years before we die.”

All of this contributed to the “diseases” that are symptomatic of the Industrial Age and require reframing business principles as needed. You’ll read about the 21st century Industrialist, for example, which gave rise to the rugged individualist, or the idea of being big (just to be big).

The qualities that worked well may not be a best fit for being engaged with the work expected.

The Rise of the Stakeholders

Blakeman is not saying not to hire employees.  He’s saying that you need to treat employees differently today.

He advocates that we are in a “Participation Age,” a period in which workers must be fully engaged to provide valuable results. The Participation Age contrasts today’s best practices by reframing employees as stakeholders who take initiatives and carry responsibility for their critical thinking, benefiting their peers and organization as a result:

“In the Participation Age we are called to live a committed, fully engaged, fully integrated, and imbalanced life and to share that lie with the world.”

Businesses highlighted in the book are from traditional industries.  This makes the book a useful journal for managers who do not view their business as a “tech” business but need to assess how to best leverage applications that have a presence on operations, such as software-as-a-service tools.

It’s an interesting contrast to ideas advanced by tech-centric entrepreneurs like Jason Fried and David Heinemeier Hansson, authors of “Rework.”  Fried and Hansson present ideas expected from tech entrepreneurship. Blakeman’s points about meaningful work compares, but with an added emphasis on reimagining responsibilities, even if roles seemed better kept at status quo.

The solution to the woes of the industrial age is seeking meaning in our work.  This message alone is not new, but Blakeman innovates by connecting the message to the historical industrial perspective.  For example, the Industrial Age was meant to support Safety, Security and Stability.  Those three have built a foundation for a new “S” – Significance.  To drive home his point about how disruptive this concept is, Blakeman notes how Millennial professionals have come to value it:

“…millennials who grew up in the shadow of the Industrial age … are one of the first generations in the history of the West to be born with at least a modicum of all three of those things (Safety, Security, and Stability) provided for them at birth. They aren’t looking up from the bottom.”

Among the solutions advocated is a unique perspective on balance – the illusion of it being an attainable goal worth pursuing:

“Too many business owners go into business looking for an Ozzie and Harriet “lifestyle business” – assuming they can step right into working three and four days a week so that they can be balanced…Momentum does not come from balance. It comes from being very imbalanced and focused on something …. Balance, especially in the early effort, doesn’t help us build a great life or a great business. It’s just another form of playing it safe.”

You may want to also take a few minutes to read the afterword, “How Capitalism Will Solve Poverty” and a global view of where engagement can take us.

All in all, read this book to gain a new perspective on where your business fits in an increasingly technological world. Moreover, read it to learn how to best unleash your company culture into a productive one that will continually attract employees — employees who are engaged and treated the way the 21st century employee expects to be treated.