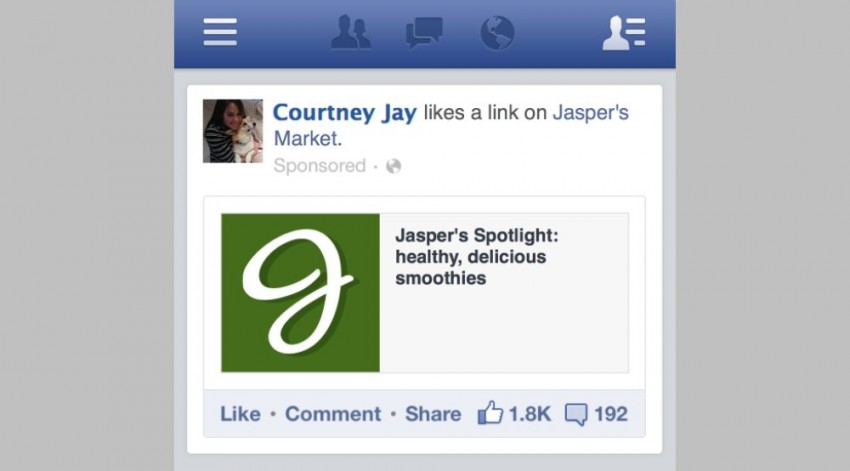 If you blinked you might have missed it. In a recent edition of its “Platform Roadmap” published in Facebook’s development section, the company said it would “sunset” its sponsored stories advertising option.  Or they may only be sunsetting a type of sponsored story.  Like much of the language around Facebook’s ad products, it’s bafflingly confusing and unclear.

But the part we do know, at least, is that sponsored stories that show certain aspects of what other people Like, are being discontinued effective April 9, 2014.

This ad product is not to be confused with “promoted posts” (which are staying).  Promoted posts are when you pay to promote one of your own Facebook update posts.  Those remain unchanged by this announcement.

Say, for instance, that your name is Courtney Cronin and that you “Liked” something on the Jasper’s Market website.  Jasper’s Market could pay to have that action (with your name and face attached) turned into a sponsored story ad.   (See image above).

So why are they being discontinued?  Facebook doesn’t say.  But, sponsored stories have been controversial.

Facebook says these notifications provide sponsors with “social context” showing that users are interacting with the brand. But critics of the sponsored stories feature have said that it gives the impression of an endorsement and should require a user’s consent for use of their image and name.  So in the example of Courtney Cronin, if Courtney happens to be a prominent food critic and writes a popular food blog, it could amount to a valuable endorsement, without paying Courtney anything for the use of her name and likeness.  If you were Courtney, you might not like that.

The elimination of sponsored stories may have something to do with a class action suit recently filed against Facebook which seems to connect to the feature.

This lawsuit alleges that Facebook “faked” likes from a Colorado man, Anthony DiTirro, (and perhaps others).  It claims Facebook also featured DiTirro’s photo and name on a sponsored story paid for by USA Today. DiTirro is asking for $750 in damages for himself and restitution for any other users affected.

Conspicuously, the suit was filed the same day Facebook announced it would discontinue the sponsored stories feature, observed Marketing Land.

In its announcement on the official “Platform Roadmap” outlining future Facebook developments, the company seemed to downplay the importance of the sponsored stories feature, explaining:

Got that?  It wasn’t very clear to us either.  But one thing that seems clear is that you can no longer create new sponsored stories that involve Liking something on a company’s webpage. And existing ones have to be finished with their runs by April 9th.

The concession may speak volumes. Critics have insisted that Facebook sees its users more like products than customers. But it is their interest that drives activity on the site and their attention advertisers are paying to capture.

We’ll update this story as the facts become clearer.