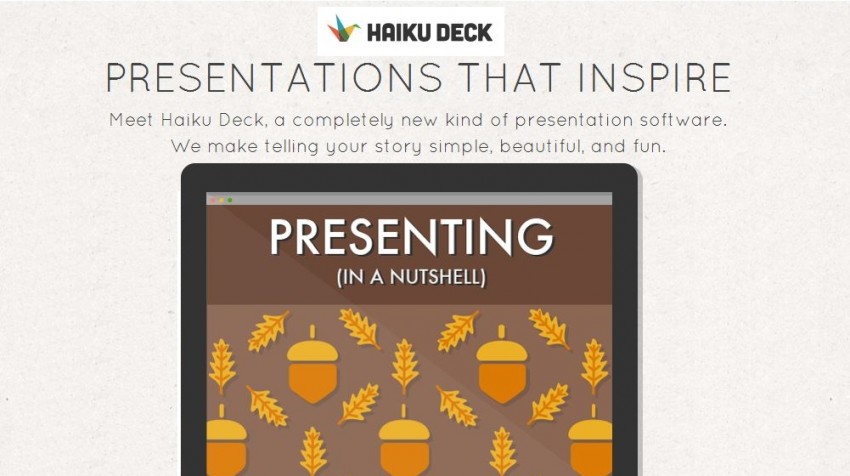 Sometimes the best business ideas come from solving a problem we ourselves have experienced. That’s how Adam Tratt says the idea for Haiku Deck came to be.

The application aims to create an alternative to fuller featured presentation software like PowerPoint. The idea is that fewer features might actually make it easier to create presentations by not overwhelming users with so many options.

But the concept didn’t come to Tratt and his team until they were trying to dissect a business idea that went wrong, Tratt told Small Business Trends in a recent Skype conversation. Tratt says:

“I love to start with the story of why we built it.”

Fresh from a job with b0ard game startup Cranium, now owned by Hasbro, Tratt was working on a Facebook celebrity game featuring rapper Sir Mix-A-Lot. (Yeah, it ended up pretty much like you’d expect.)

But what he came away with in analyzing the startup’s missteps was the realization that the hardest part had been creating a presentation on the dominant format, Microsoft’s PowerPoint. He wondered if it would be possible to build something easier to use.

The result was Haiku Deck, an iPad and now Web-based app that allows users with limited technical experience to create digital slide presentations and share them via the Web and social media.

To figure out how to build the new application, Tratt’s team started by boiling down the advice most often given for great presentations:

Tratt says the iPad app was launched around Labor Day 2012 and is now approaching one million users. A beta Web version was released more recently. Last week a new iPad version was released with translations in seven additional  languages besides English  and the ability to change the color of the text being used on the slides.

The app is free with added presentation themes offered for an added  cost.

Shawn Hessinger is the Executive Editor for Small Business Trends. A professional journalist with more than a decade of experience in the traditional newspaper business, he has another 10 years of experience in digital media for trade publications and news sites. Shawn has served as a beat reporter, columnist, editorial writer, bureau chief and eventually managing editor with responsibility for nine weekly newspapers, the Berks Mont Newspapers. He is also a member of the Society of Professional Journalists.
8 Reactions
Subscribe
Follow @smallbiztrends
RSS LinkedIn Pinterest iTunes