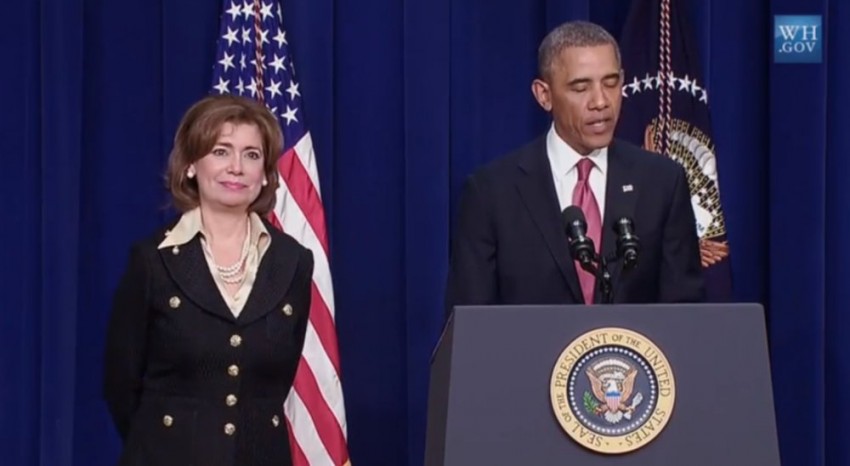 Maria Contreras-Sweet, who founded a community bank in Los Angeles, was nominated today by President Barack Obama to become the next Administrator of the U.S. Small Business Administration.

She founded ProAmérica Bank, in Los Angeles in 2006.  The bank’s website says it:

“… was formed to serve the Los Angeles business community and ultimately to become the leading financial services provider of Latino entrepreneurs. As the first Latino-formed business bank to debut in downtown Los Angeles in the past 30 years, PROAMÉRICA BANK is dedicated to building family wealth by empowering entrepreneurs with the requisite financial services and capital infusion for the success of their small to mid-size businesses.”

According to BizJournal, it’s a small bank at $148 million in assets and has done a small number of SBA loans (just 4 in the most recent quarter).

“So not only did she start small businesses, but they were her customers. She understands the needs of small businesses…. She knows the important part they play in the community.”

Contreras-Sweet was born in Guadalajara, Mexico.  She was the secretary of the California Business, Transportation and Housing Agency from 1999 to 2003.

Her nomination has been met with cautious optimism by small business advocacy groups.

Katie Vlietstra, vice president of the National Association for the Self Employed (NASE), said,

“We are optimistic that with the announcement of Maria Contreras-Sweet to lead the Small Business Administration, President Obama and his Administration will be focused on fostering and encouraging the entrepreneurial spirit of this country, including for the 23 million self-employed who are working tirelessly each and everyday to achieve the American Dream.”

“Finally!  The nomination of a new SBA Administrator has taken far too long, but it appears that Maria Contreras-Sweet is well-suited for the role.  Hopefully, upon confirmation, she will reach out and more actively engage with entrepreneurs and small business organizations to listen to their ideas and concerns. For the past year or more, the SBA has gone dark in terms of outreach. Beyond effectively managing the core functions of the SBA, it is equally important that she convey to President Obama and his economic team, small business concerns about the new health care law, the state of the economy, regulatory overreach and access to capital issues.  Small business owners need better policies from Washington….”

“Like thousands of community bankers across the nation, Ms. Contreras-Sweet has dedicated her career to helping small businesses, consumers and local economies thrive. As a passionate supporter of small businesses, she would be an excellent SBA administrator.”

“Many of us hoped the President’s decision to elevate the SBA Administrator to Cabinet level was a sign that this White House would value small businesses, but the 11-month timespan between Karen Mills’ resignation announcement and a successor being nominated showed us that small businesses really aren’t valued much by this Administration. Small businesses have been bombarded with a flood of regulations, a health care law that stifles growth, and a constant fear of tax increases during the past five years. I hope the new SBA Administrator will give a voice to small businesses in this White House and redirect the SBA to focus on its core missions of capital access, contracting, and counseling, while reducing duplication, overlap, and wasteful spending. If she is confirmed, I will look forward to working with Ms. Contreras-Sweet to do so.”

A trial balloon proposal had been floated by the Obama administration to consolidate the SBA under the Commerce Secretary.  Unfortunately, something similar has been proposed by a Republican, Senator Burr.  It is a terrible idea, because small businesses need a very visible agency.  It seems to be a solution in search of a problem. We hope that terrible idea dies.