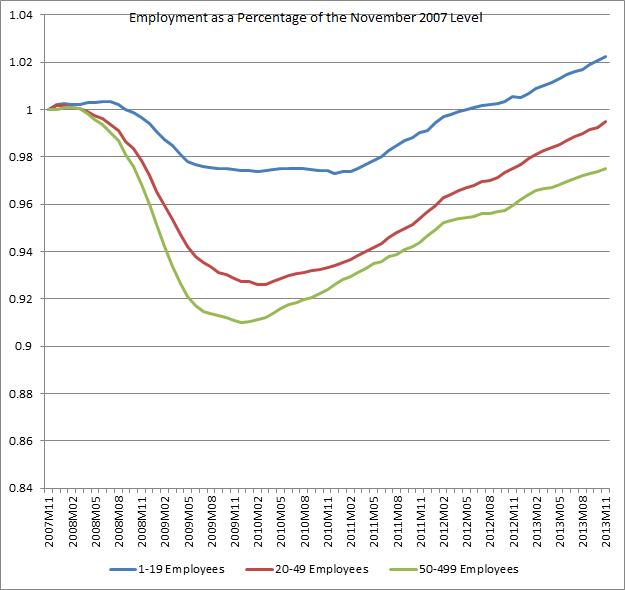 Source: Created from data from the ADP Employment Report

Economists often talk about small businesses as if they were all the same size. But “small businesses,” which comprise 99.7 percent of all companies, include everything from single-person companies to 499-employee firms. Treating them as homogeneous doesn’t make a whole lot of sense.

Given the varied reasons that the owners of different sized small businesses have for adding additional workers, it’s not surprising that hiring patterns weren’t the same at the smallest and largest small businesses during the Great Recession and the not-so-great recovery that followed.

The figure above shows employment as a percentage of November 2007 levels from December 2007 (when the Great Recession began) through November 2013 (the latest month data are available) for establishments with between 1 and 19, 20 to 49, and 50 and 499 employees, using data from ADP Employment Report – a monthly measure of private non-farm employment generated from ADP’s payroll clients that the payroll firm produces in conjunction with Moody’s Analytics.

The picture shows that when it comes to explaining job creation, observers should avoid talking about small businesses as if they are homogeneous. Small establishments of different sizes vary greatly in how many jobs they cut during downturns and how many they add during recoveries.